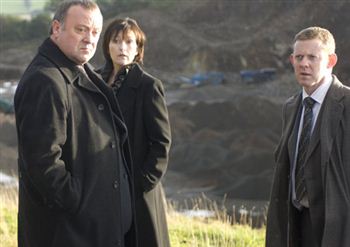 FICTIONAL crime heavyweights from top Scots dramas Rebus and Taggart are to go head-to-head for a charity spoof special.

Taggart’s DCI Matt Burke – played by Alex Norton, 59, – and his team will clash with DI John Rebus when they investigate a murder in a one-off BBC production for Children in Need next month.

The two uncompromising detectives – both known for their tyrannical outbursts at suspects – will come face-to-face when a body is discovered in Harthill, Lanarkshire – halfway between Glasgow and Edinburgh.

Stott has previously appeared in Taggart, which is the world’s longest continually running police drama.The 53-year-old played a sinister doctor in the show’s second episode in 1985, alongside Mark McManus, who played DCI Jim Taggart until his death in 1994.

One BBC insider said that the mini episode would have fans of either show in stitches.

They said: “It’s the showdown that everybody wants to see – Rebus versus Taggart.

“It’s a very funny script and the first time the two of them have come together on screen.

“Both characters are excellent detectives, so it’ll be fascinating to see who comes out on top. It also addresses the whole Edinburgh-Glasgow rivalry – the viewers will love it.”

Taggart, has parodied over the years since it first aired in 1983, and is famous for its catchphrase, “there’s been a murder”.

Filming on the mini-episode is thought to begin this week.