CELTIC legend Jock Stein’s first ever medal for the club is to be auctioned next month.

The 1953-54 Scottish Cup medal was Stein’s first major honour during his five-year playing career with the Parkhead club. 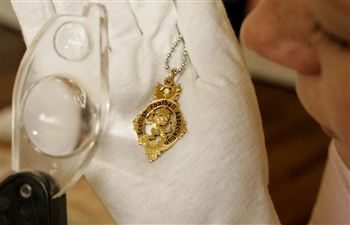 The gold medal – which was presented following Celtic’s two-nil win over Aberdeen – is expected to fetch as much as £5,500 when it is sold in an auction in London.

It was displayed during a showing of the auction lots at The Highland Centre at Ingliston, near Edinburgh.

The medal is being auctioned by Convery Auction Limited and will be sold at an auction at Lords Cricket Ground on November 16.

Auction Director David Convery said the medal could fetch up to FIVE times the normal asking price of a Scottish Cup winner’s medal because of its illustrious winner.

Mr Convery said: “A normal Scottish Cup medal will usually go for between £1,000 and £1,5000 but considering who this one belonged to we believe it will make quite a bit more.

“It is a great opportunity for a collector or a fan, or perhaps even the club themselves, to get a piece of real Scottish footballing history.

“It is very seldom that a medal like this comes onto the market.”

Mr Convery said the medal had been gifted to a friend of “Big Jock” and, after a time at the Scottish Football Museum at Hampden, had been put up for sale by an anonymous owner.

He said: “He gave it to a close friend of his years ago so it has not come from the family.”

Stein – who passed away in September 1985 – remains one of the best loved characters associated with Celtic.

All but one of these honours – the 1961 Scottish Cup with Dunfermline – were won with the Hoops.

He also went on to manage Scotland and in a 2003 survey he was voted the best ever Scotland manager.