THE FORMER presiding officer of the Scottish Parliament Lord Steel paid a touching tribute to the Queen’s former press secretary Michael Shea as he was laid to rest yesterday.

Lord Steel, the former leader of the Liberal Democrats, described how his life-long friend had touched the lives of everyone he met with his kindness and humour – including the Queen herself.

He described to a packed Warriston Crematorium in Edinburgh how he spoke to the head of state herself just after his friend’s death, saying that she was “saddened” by the news of Mr Shea’s death.

He said: “I know she was fond of him, because the Queen told me herself last week, ‘nobody told me he was ill’ – not the kind of remark you would expect of some routine ex-employee.”

“He leaves behind an extraordinary record of public service, a treasure trove of books, and a huge host of admiring friends and colleagues.“We first got to know Mike at Edinburgh University, and we’ve been friends for exactly 50 years this month. 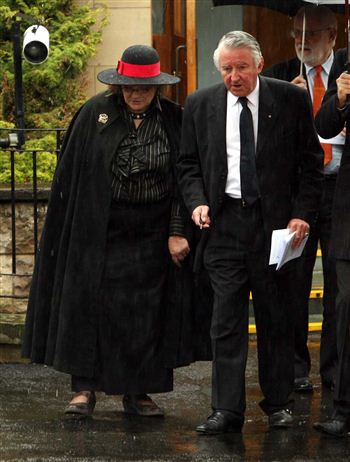 “He arrived after two years in the intelligence corps, and was immediately a conspicuous figure, handsome, well dressed, debonair.

“He could be seen with the roof down on his convertible, driving down princess street – in the days that that was possible – with his scarf blowing in the wind, accompanied by one of his beautiful girlfriends – to be honest we were all just a bit jealous.”

And so many people turned out to the ceremony that dozens had to stand in the reception of the crematorium, despite the pouring rain.

His daughters Katriona and Ingeborg were moved to tears as they paid tribute to their dad, saying: “He was a man who managed to write a PhD, work as a diplomat for the Foreign Office, write novels and publish them and raise a young family all at more or less the same time.

“He gave us a strong moral confidence, and the drive the make the world a better place.

“He was clever and funny, and silly, and inspiring, and we loved him so very much.”

Lord Steel went on to describe Shea’s incredible rise from a young conscript in the Intelligence Corps, to the right hand man of the Royal Family, adding that he had been given awards by 15 heads of state, for his work in negotiations and matters of state.

But despite his rapid rise to become a senior diplomat in New York, and from then to serve the Royal Family, Steel described how Shea was a fun-loving host – who even held parties on the roof of the Foreign Office while the phones rang downstairs.

He said: “Two of his young colleagues were Robin Renwick, the future ambassador to Washington and David Gore Booth who would become our High Commissioner to India – both of whom shared his love of good parties.

“And I can remember several held on late warm summer evenings, held on the roof of the Foreign Office at Whitehall – quite what happened during international crises I can’t recall.

“He became one of a tight circle of friends that exists to this day.

“Just this month I drove Mona and Michael to South Queensferry on a glorious sunny autumn day for lunch beside the Forth bridges – 17 days later he was dead.

“We were all shocked at the suddenness of his death, but in his last year of a gradual decline, at least he was able in May to go to America to visit his newborn baby grandchildren, and see Michael, who was named after him, and Esme. 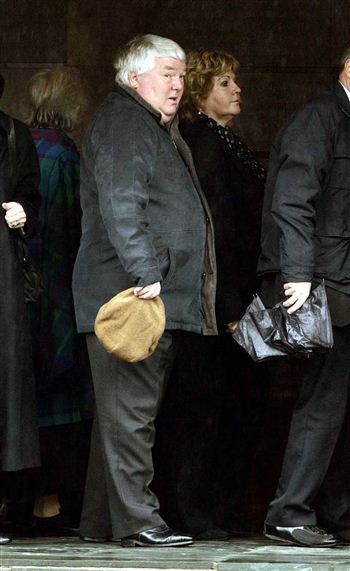 “Michael was a fiercely loyal and protective friend, he enjoyed life, and in those early years his red walled flat was a regular haven of good drink and conversation.

“He will be missed most as a deeply loving husband and father, but he leaves behind an extraordinary record of public service, a treasure trove of books, and a huge host of admiring friends and colleagues.”

He died on October 17 having served as the Queen’s press secretary from 1978 to 1987 and accompanied her to 65 countries during a tumultuous period for the Royal Family.

The career diplomat also served during the wedding of Prince Charles and Diana and became a well-known figure in the UK after speaking on behalf of the Royal couple.

Lanarkshire-born Shea first served in Bonn during the Cold War, after being “poached” by the Foreign Service.

He then met a Norwegian diplomat, who would become his wife, and would later draw on his experiences in Germany to pen his successful novel, Sonntag.

Throughout his career Shea wrote two dozen books, including many thriller novels in a time when spies were stalking the street of the German capital and back home the IRA were terrorising London and Belfast.

One, Sonntag, went on to be translated into eight language and spurred the young author on to write two dozen more.

A later novel, The Dollar Convenant, features the dystopian future of an independent Scotland, where the country is paralysed, the economy in ruins and a huge US telecommunications company is attempting to seize control of the country.

Like his predecessor at the British embassy, David Cornwell, better known as, John le Carre, Shea also had to write under the name Michael Sinclair.

Once he retired, he republished his terrifying vision of an independent Scotland under his real name in 2000 and used the basis of the original plot for a series called State of a Nation, which was serialized in The Herald in 1997.