GRIEVING colleagues of fallen firefighter Ewan Williamson took part in a marathon of climbing and abseiling in Edinburgh yesterday.

Firefighters from Tollcross Station, where Ewan was based, were scaling the combined equivalent of Snowdon, Ben Nevis and Scafell Pike on the face of Edinburgh’s Sheraton Hotel Spa.

The three peaks feat, which totals more than 3km of climbing, was to raise money for the Fire Fighters Charity and the Ewan Williamson Memorial Fund.

Members of Ewan’s watch at Tollcross Fire Station were on duty during the event but some black-clad colleagues also arrived to pay their respects to Ewan, who died on 12 July this year while fighting a pub blaze in the Dalry area of the Capital.

Mr Foley, 49, said: “Ewan was a colleague of us all, and was based at our station.

“All of Ewan’s colleagues are still trying to come to terms with his death – he was a very likeable and affable fellow and an important member of the crew.

“He’s left a big gap in our working unit, so I hope today that through the actions of his colleagues displaying their skills, we can raise a bit more money for his family.” 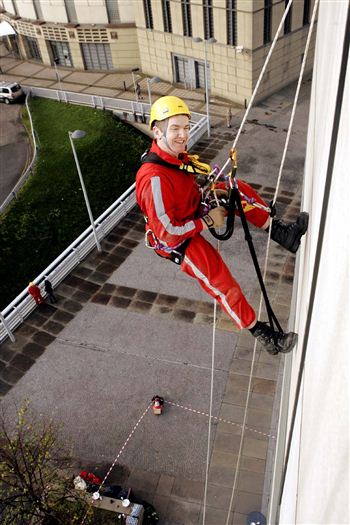 Mr Foley, from Ormiston in East Lothian, added: “This type of rescue skill is one which is perhaps unfamiliar to a lot of people, but it’s one that’s very pertinent to our station at Tollcross.

“It’s used mostly where people are stuck or trapped, and need to be rescued from a height.

“So today’s an ideal opportunity to exhibit these skills, and to raise money for a worthwhile trust and charity.”

Fifteen firefighters took part in the challenge, which saw them scale the wall more than 180 times.

The fund-raising effort follows a charity campaign that raised more than £5,000 at a Hearts against Rangers game in August for Ewan Williamson’s memorial fund.

Brave Ewan, 35, died as part of a firefighting team that saved 20 people from the burning Balmoral Bar in Dalry, and since his tragic death there have been calls for him to be awarded the Queen’s Gallantry Medal.