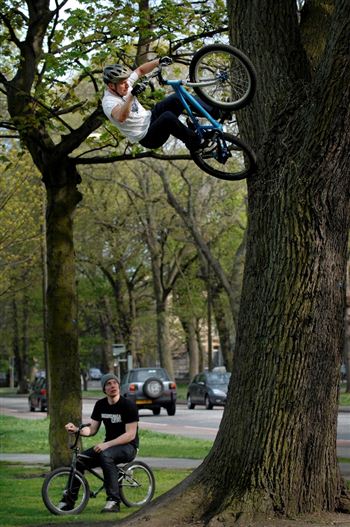 23-year-old Danny, whose incredible leaps and somersaults in Scotland’s capital saw him shoot to virtual fame in April this year, smashed his collar-bone after falling in the street.

He first damaged the bone in the United States, falling on it while biking in San Diego, California.

The injury healed, but on his return to Edinburgh he tripped on the pavement, causing more serious damage.

The Edinburgh resident, originally from the Isle of Skye, said: “I just fell on my side in California, but unfortunately I had a fall over here as well and broke it a lot more, and it had to be plated.

Since his increase in popularity, Danny has been inundated with offers to star in adverts – and even to join a Korean circus.

But his stunt-biker career will have to be put on hold while he recovers from his injuries at his home in Tollcross after an overnight stay at Edinburgh Royal Infirmary.

One of the companies that asked Danny to star in an advert was Volkswagen, and although the clip is yet to be aired in the UK, eager fans can catch it on YouTube.

In the clip, he performs a series of fearless stunts before packing his bike into the back of a VW van – before being chased out of it by a wasp.

Danny said: “The down side was that I had to do some acting – I got flown out to Copenhagen for four hours to see if I could do the acting part.

And commenting on his new-found online fame, he said: “We posted it with absolutely no expectations – it never crossed my mind what kind of reception it’d get.