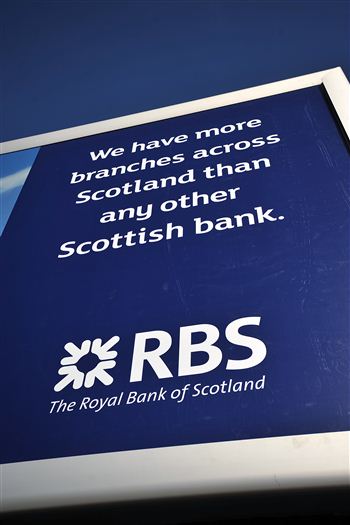 THE UK Treasury is to plough billions of pounds into the beleaguered Royal Bank of Scotland, as part of a massive state-backed insurance scheme.

The Scots bank will become 84 per cent owned by the taxpayer, bringing it a step closer to being completely state-owned.

A Treasury announcement this week will confirm that RBS is to sign up to a controversial £270billion deal to pump government funds into a state insurance scheme.

RBS – which was once the richest bank in the world by assets, and at the centre of the UK banking crisis – will receive up to £19billion of new capital.

The move will mean that the organisation – which is already 73 per cent state-owned – will be virtually nationalized, with only a handful of private shareholders remaining.The firm had attempted to renegotiate the insurance deal with the Government, but the terms of the agreement are even more oppressive than originally thought.

RBS is expected to be saddled with an additional £20billion loss on its own balance sheet, even before claiming on the Government’s insurance scheme.

The bank was already committed to cutting its balance sheet by 40 per cent, by selling its insurance facilities when Sir Fred Goodwin was in charge.

However, the plans were scrapped under current boss Stephen Hester.

One analyst said: “They still have huge problems with the balance sheet they acquired from ABN Amro.

“There was a lot of really bad stuff in there, it really was a terrible deal.”

The failing bank will also have to deal with the backlash from the European Union, who has issued punitive restrictions on the banks that have been bailed out by their governments.

European Competition Commissioner Neelie Kroes has ordered that RBS must sell Churchill and Direct line, along with Green Flag.

Ms Kroes has also been at the forefront of demands to create new ‘good’ banks, which are now set to go ahead in the UK.