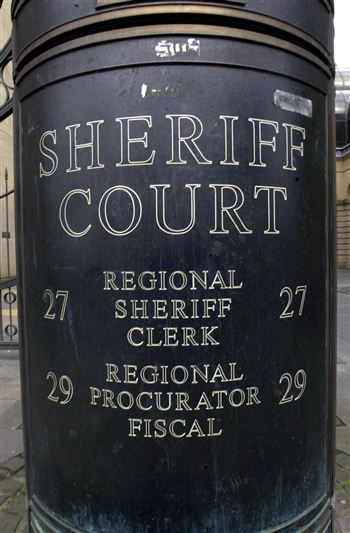 POLITICIANS are urging the Scottish Government to “sort out” problems within the court translation service as it is revealed that there is a real risk of serious miscarriages of justice.

It has been claimed that trials are being handled by inexperienced interpreters following the implementation of a new Government tender.

Angry translators have now formed an action group after becoming increasingly concerned at the impact the new contract is having on their jobs – and on the Scottish criminal justice system.

The newly formed Scottish Interpreters and Translators Association (SITA) fears qualified interpreters are being “held to ransom” because translation companies have undercut market rates to win the contracts to supply interpreters to Scottish courts and other government services.

And they plan to take their protest to Alex Salmond in a bid to highlight how court cases could be jeopardised by inexperienced interpreters translating in trials and how the Government have missed a chance to ‘professionalise’ the service.

“Nothing has been done”

The group have attracted support from Scottish Labour, who say they have been worried about the state of the service for some time now.

Richard Baker MSP said: “The integrity of the Scottish justice system requires Kenny MacAskill to sort this out.

“Labour has been raising questions about the Court Translation Service for over a year now and it appears that nothing has been done.”

And the court service is being affected by these cuts – earlier this month, a case at Edinburgh Sheriff Court had to be halted because a Russian interpreter did not show up to translate for a defendant.

The row revolves around the decision by the Scottish Government in June to award one company, Glasgow-based Global Language Services (GLS), with a contract to supply interpreters to public sector bodies including the Scottish Courts, the Procurator Fiscal Service and the NHS.

Court interpreters, who work for language agencies on a freelance basis, claim GLS have now cut pay rates by 30-40% and refused to pay travel expenses for assignments under 70 miles to meet the tender requirements – and that unqualified interpreters are being hired over experienced professionals in a bid to keep their prices low.

A SITA spokesman said: “Within days of being awarded this contract, the rates interpreters were being paid were slashed.

“It is very easy to say something in a slightly different way and for it to mean something completely different. It means you could be communicating what the witness, victim or accused intends to say in a completely false way to the judges and lawyers. If people are not trained properly this is going to affect the quality of the delivery of justice.”

The spokesman said rates have been coming down over the last few years anyway – but since the new contract came into effect they have effectively lost up to 40% of income for each interpreting contract because all expenses have been stopped.

Court interpreter Melanie Beaumont said the new conditions meant interpreters were effectively being forced to work for less than the minimum wage.

She said: “It takes many years of practice and training to get to a level that is sufficiently competent to provide interpreting for a court environment or for other public sector organisations.

“Putting such a low value on this tender is not only insulting to the interpreters that currently provide these services, but it will be highly damaging in the long run.

“You’ll get to the point where the interpreting company will be picking language students off the street, without any formal training or qualifications, and expecting them to carry out intricate work in a high pressured court environment.

“This could lead to gross miscarriages of justice caused by interpreters not being good enough to do their job properly – and which, ultimately, will end up in costing the taxpayer even more money.”

Michael Monro defence solicitor for Mackie and Dewar, and a member of the Aberdeen Bar Association, said interpreters he had hired to act on behalf of his clients had questioned translations of those hired by the courts during proceedings.

He said: “I know that some people are concerned about the ability of some of the interpreters, there have also been some misgivings perhaps because of the low rates of pay on offer to the poor interpreters. A lot of interpreters are being forced out of the profession because of this.”

Mr Monro said he now got his own hired interpreters to check recordings of police interviews to ensure questions and answers had been correctly interpreted between his clients and the police.

He added: “I have seen cases postponed or delayed because of a lack of interpreters, and in an ongoing case my client’s interpreter hired by me questioned the interpretation of the court interpreter.

“There may be times when you will see a long conversation with the accused, but the interpreter simply turns round to the court and say yes or no.”

And the company behind the service – Global Languages Ltd – admit that they have encountered problems, but blame the cheap government contract for the shortcomings.

George Runciman, Managing Director of Global Languages Ltd, said the cuts in travel expenses of trips under 70 miles came about because the Scottish Government wanted to use local interpreters for court proceedings.

He said: “Some interpreters have lost money because of the cuts in travel expenses but this is a competitive business and in this current economic climate, public funds for interpreting and translation services are tight.

“We are providing the services now, but if it wasn’t us another agency would be in the same situation.

“We have always had a good relationship with our interpreters, now we are being accused of penny pinching when the money isn’t there.

“I am only aware of two or three people who have given up court work since this new system came in.

“We work with set rates for court so everyone gets paid the same no matter what the experience.”

“Where this is not possible, written recommendations are required from the employer to state that the translator has equivalent qualifications and experience, for example a qualification accredited by the Chartered Institute of Linguists.

“This must be provided in advance of a case and is made available to the presiding sheriff who can accept or decline the translator offered.”