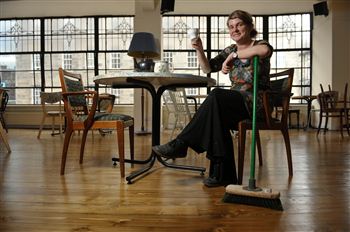 Staff at the Nicholson Café in Edinburgh used to allow single mother Rowling to escape her chilly flat and sit in the café for whole days, writing her first novels with her baby daughter Jessica, for the price of a single coffee.

Now its new owners have reopened the café – which was a Chinese buffet restaurant for several years – and say they’ll stay true to the welcoming atmosphere at the newly named Spoon Cafe Bistro.

Owner Moira McFarlane, 42, says she’s more than happy for customers to escape the cold and spend the whole day reading, writing or chatting with friends.

She said: “It’s a big space, so we need to make it cosy – we will welcome people to come along and sit all day – and write books if they like.”The businesswoman, who already owns the Spoon Café in Old Town and runs the Storytelling Centre coffee bar on the Royal Mile, says the café is unlike any other.

She said: “Every time I mention it everyone says: ‘Isn’t that where JK Rowling wrote Harry Potter?’

“It’s good to have something like that – it’s part of the history of the building.

“It was a Chinese Buffet King before and they said they had a plaque downstairs by the door and it kept getting pinched.

“But I think we might have to put one on the door, because it seems popular with tourists.

“We were warned when we took over that people do come from the worldwide to see it.”

And Moira admits that the café wouldn’t be complete without a visit from the award-winning author herself.

“We haven’t invited her yet, but I think we might have to do that because it’s mentioned so much.

“People really like the idea, they really get quite excited about it, so in the future we will write to her and invite her along for a cup of tea.”