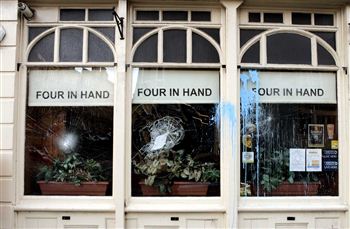 A PUB owned by former Hibs star Paul Kane has been attacked just three months after he took over.

The Four in Hand in Edinburgh – just yards from the team’s Easter Road stadium – had every one of its windows smashed shortly after 4.30am yesterday (Monday) morning.

And vandals have covered the outside walls, windows and pavement in blue paint, which can be seen trailing down Easter Road.

Kane said the attack was a “mystery”, but insisted he would not allow any disruption to his new business.

The bewildered 44-year-old said: “I got a call at 4.30am this morning when the alarm went off and when I came down the place was secure, so it must have happened after that.“I’ll have to call my staff and the guy that was on last night and see what happened, but it’s a complete mystery.

“You can speculate about the blue paint or whatever but I’ve no idea why this happened.

“There were no problems on Saturday or Sunday or anything like that.”

A defiant Kane said: “I just want to get everything cleared up and get back to normal – we’ll definitely open as usual today.”

One neighbour, who lives above the pub, said she was shocked by the attack.

She said: “I didn’t hear anything last night but my boyfriend said he was woken up by banging during the night.

“I can’t quite believe that, there’s been no trouble or anything before.”

Former midfielder Kane played at Easter Road from 1982 to 1990, making 247 appearances and scoring 33 goals for the club.