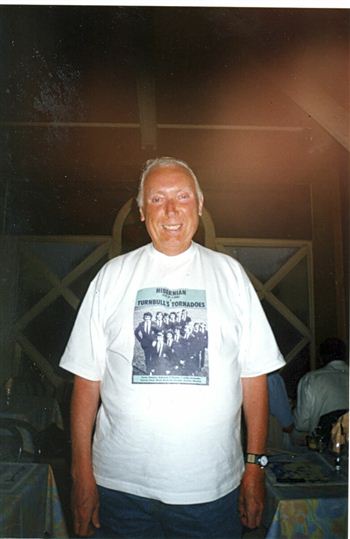 HUNDREDS of mourners turned out to pay tribute to a Hibs fanatic who missed just one game in an incredible 55 years devoted to the club.

Friends and family flocked to the funeral at Mortonhall Crematorium in Edinburgh yesterday to bid farewell to Walter “Wattie” Robb, many of them wearing green and white, instead of black.

Wattie passed away at age 74, after supporting Hibernian all his life, he was laid to rest in his Hibs colours.

Although born in Grangemouth, he moved to Rossie Place, just off Easter Road, when he was young and lived there for 20 years.

Hibs manager John Hughes led the tributes to Wattie, one of the Easter Road sides best-known and most committed supporters, saying that he was the dictionary definition of a football fan.

He said: “The first time I met him he told me I was rubbish.

“Wattie was what you call a supporter – if were to have a definition of football supporter in a dictionary it would simply read ‘Wattie Robb’ – he will be sorely missed.”

And his greatest memory was Hibs’ 7-0 derby win at Tynecastle on New Year’s Day in 1973.

His younger brother Alan said: “When I was getting married Wattie warned me not to make it Saturday when Hibs were playing because he simply wouldn’t be coming.

“The only game Wattie missed, a friendly against Aston Villa, was on the day of our father’s funeral.”

His friend Willie McEwan told of a time when Wattie met his hero Gordon Smith.

He said: “They were having an awards ceremony for the Famous Five and Wattie didn’t know that he was going to be presenting Gordon Smith with a plaque.

“When he found out he was like a wee boy at Christmas.”

Frank Dougan, the Hibees Supporters Association treasurer, said that Wattie made sure he always made away game as well, even driving across Europe to make a friendly match.

He said: “One trip I remember well was going to a pre-season friendly in Austria two years ago.

“We’d left in plenty of time to catch our flight from Stansted Airport only to be caught in a five-hour delay because of an accident on the motorway.

“We just drove on to Dover, caught the ferry, and got there an hour before kick off.”

Mr Robb also passionately supported the club’s youth team, and a collection for donations at the funeral is to be given to the Hibernian youth academy.