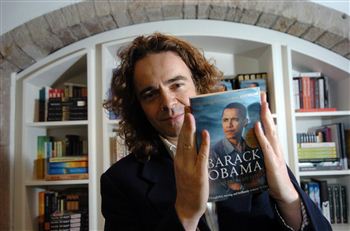 A SMALL Scots publishing house is reaping millions in profits after it bought the rights to Barack Obama’s best-selling titles – before he was president.

Jamie Byng’s publishing firm Canongate has posted a massive turnover of £7.35million in just six months, after the US president’s non-fiction works topped the charts across the globe.

The 40-year-old discovered the aspiring Democrat senator’s book three years ago and snapped up the UK and Commonwealth publishing rights.

Last year the Edinburgh-based firm’s profits rocketed by 850 per cent as the books were just taking off.

Jamie – who cut his business teeth running nightclubs in the capital – said that the “Barack bounce” would make the firm cash for “many years to come”.He said: “Being the publisher has been hugely significant for Canongate.

“Not only are his books of great quality and importance, but they look set to sell for many years to come.”

Sales of The Audacity of Hope and Dreams From My Father are expected to sell two million copies in the UK and Commonwealth, not including the new e-book edition for iPods, which will see the publishers beat last year’s record profit of £2.6million.

The massive sales have also helped the firm to overcome the £170,000 they lost when Woolworths collapsed.

Canongate is among Scotland’s fastest growing publishers, and has also landed contracts to publish Homicide and The Corner by David Simon, creator of The Wire along with Nick Cave’s novel The Death of Bunny Munro.

They are also currently investing in e-books, which they believe will grow in popularity over the next few years.

Jamie added: “The group is a tightly run, focused and well-financed business, ambitious in its plans and unafraid to innovate and experiment, despite uncertainties within the industry.

“Our list has never been stronger and we have an extremely talented, experienced and committed team.”