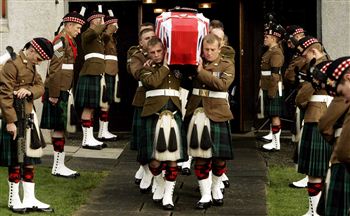 HUNDREDS of mourners including soldiers in full regimental dress turned out to pay their last respects to a fallen Scots “hero” laid to rest with full military honours yesterday (Thurs).

Sobbing relatives of Corporal Tam Mason of the Black Watch stood shoulder to shoulder with soldiers of the Royal Regiment of Scotland as they said their last goodbyes at Douglas Bank Cemetery in Cowdenbeath, Fife.

Together they heard the 27-year-old described as being “everything an officer could ask for in a soldier”.

But the most emotional tribute came via his mother Linda who, unsteady on her feet as she said goodbye, paid a heartfelt farewell to her “brave” son.

In a penned tribute, she said: “You are the best there ever was Tam.“Brave, soldier, so, good friend. I know that in time the pain we feel losing you will end. 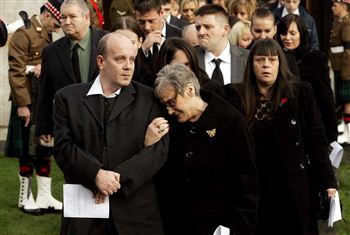 “So we will struggle to be without you, without your laugh, your smile. I know we will meet again Tam.

“Even if it takes a while.”

She added: “You were many things to many people, Tam – grandson, husband, friend, best brother.

“But to me you were everything – and I will always be your mother.”

Corporal Mason, bravely fought to survive the injuries he suffered in an IED blast in Afghanistan for six weeks, before passing away on 25 October.

Speaking at Douglas Bank, Mason’s commanding officer Captain David Mack said that it had been an “honour” to serve with the young soldier.

He said: “He was a man who knew right from wrong and acted courageously – the man was a hero.

“He was an immensely proud man with a great sense of humour – he took pride in his work and will be sorely missed.

“He was everything an officer could ask for in a soldier, and it was an honour to work alongside him.

“And it was an honour to have known him.” 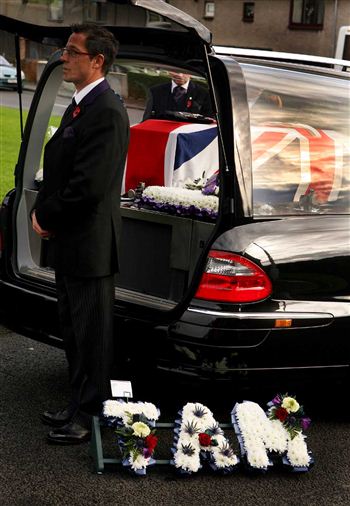 Mason’s nieces and nephews Jordan, eight, and twins Ross, six and Kelsie, six, sobbed as they heard their uncle described as a brave hero who would give everything to the men he served with.

A shooting party in full regimental dress fired three shots into the air, before saluting their fallen comrade.

Other mourners jolted at the report of the gunfire, others stared at the ground or off into space.

They sobbed as Tam’s coffin was lowered slowly, precisely into the ground, with the Union Flag sat on top, neatly folded by fellow soldiers.

The sun shone throughout the ceremony as touching tributes were paid to the young soldier who had risen to the rank of corporal in just four years.

Lt Col Stephen Cartwright, commanding officer of the Black Watch, said: “He hadn’t bee in the Army very long, and to get to his rank in four years in a real achievement.

“We are a family-like battalion and everyone would like to be here.

“We put ourselves on the line – and that’s what he did.”

Tam’s mum Linda Buchanan, had to be steadied by her husband Charlie at the funeral.

Through tears for her dead son, she said: “You are the best there ever was, a beloved son, a good friend

“Thank you for your laughs and smile, I know we will meet again.”

Funeral Support Payment to be increased