Salmond on crash course with voters over new Forth Road Bridge

ONLY a third of Scots support a £2billion project to build a new bridge over the River Forth, according to a new survey. 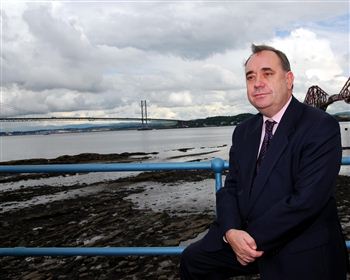 And more than half would rather a fraction of the cash was used to repair the existing bridge, which has long-term weakness issues.

But the Scottish Government claimed it would be “positive for the environment.”

Alex Salmond’s Government is set to put plans for the replacement crossing – linking Edinburgh to Fife – before MSPs a week today (Monday).

But a poll commissioned by the Scottish Greens and environmental campaigners found most voters want the cash spent elsewhere.

Patrick Harvie, the Greens leader in Scotland, said the “daft” new Edinburgh bridge was to blame for transport projects in Glasgow being scrapped.

He said: “Public transport in Glasgow has taken a beating, with the Glasgow Airport Rail Link now cancelled and the Crossrail project gathering dust.

“If you want to know why, look no further than the plans for this daft and deeply unpopular bridge over the Forth.”

The YouGov poll of 1,114 Scots found just 34 per-cent are in favour of building a new bridge across the Forth at a cost of £2.3billion.

But 57 per-cent say they want the existing bridge repaired at a cost of £122million.

A Scottish Government spokesman said: “We are building a replacement crossing as well as utilising the existing bridge.

“The case to build a replacement has never been so compelling.

“It will be positive for the environment.”