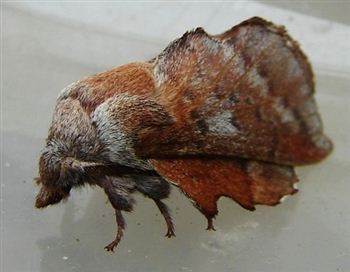 POLISH immigrants are thought to have introduced a huge tree-killing moth to Scotland – that has already laid waste to vast swathes of forest in eastern Europe.

Scientists from the Forestry Commission Scotland have said that the pine-tree lappet moth may have latched onto the luggage or vehicles of migrant workers or tourists travelling to Britain.

The government body have warned that the moths are a threat to Scotland’s forestry industry and business, which is worth £800million per year.

It is thought that economically fragile rural areas that depend on the industry could be hit hard if an outbreak similar to those that European states have experienced occurs.

The pine tree lappet – which can grow up to three inches in wingspan – laid waste to more than 80,000 hectares of forest in Germany during the 1990s, and 54,000 hectares in Poland two years ago.Only a handful of the moths have been found in the last 200 years, but more than 100 adult size moths have been discovered recently in the Inverness area.

Roddie Burgess, head of the Forestry Commission Scotland’s plant health service, said that they are currently investigating the source of the outbreak.

He said: “One possibility which we always have to take account of in any pest infestation is that of accidental or deliberate release.

“There is a population of Polish workers in Inverness.

“Possibly one of them came back in their car or van and there was contamination of some sort.”

The commission, along with Butterfly Conservation Scotland and Scottish Natural Heritage have launched an investigation to deal with the outbreak.

So far 42 trees on six sites have been cut down to help scientists discover the cause and the extent of the infestation.

Pine tree lappet moths tend to target Scots pine, Sitka spruce, Douglas fir, larch and lodgepole pine – all of which can be found in Scotland and are used for commercial purposes.