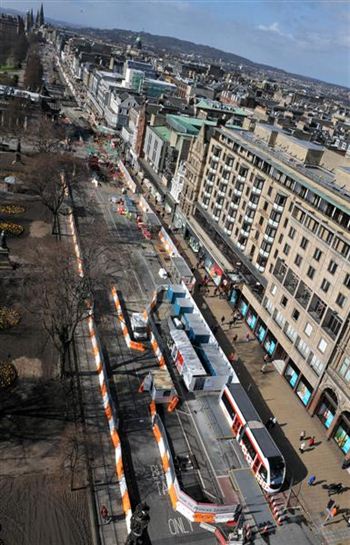 Richard Jeffrey says the massive project is likely to cost £545million instead of the original £512million budget.

But rather than going off the rails, he says he would be “pleased” if his team hit the newly raised budget bar.

Speaking in a weekend interview, Jeffrey – the recently appointed chief executive of Transport Initiatives Edinburgh (TIE) – conceded that the project was “not going smoothly.”

But he refuted claims the final bill could be £1billion.

Originally expected to open next year, the 18km track from the city’s airport to Leith and Newhaven is now due to open in February 2012.

Workers are already under pressure to finish the Princes Street stretch of track in time for the Christmas shopping season and the capital’s Hogmanay street party.

But the time frame is “very difficult” according to Jeffrey, who says ongoing rows with contractors have forced the budget up.

He said: “This project is not going smoothly, that’s very clear.

“We’ve said it’s going to be very difficult to bring it in at £545million, so if you achieve something that’s very difficult you’d be pleased with yourself wouldn’t you?

“I am working to try and deliver this project for £545million. I think if we do that it will be great success.”

Jeffrey hit back, saying: “Speculation –whether it’s Shirley Anne Somerville or some retired engineer – that’s all it is.

“Let them speculate. I have a very clear view that £545million is not impossible.”

Ms Somerville responded: “It isn’t going to be difficult to bring the project in for £545million, it is going to be impossible.

“It is simply not good enough to say we should wait until the project is completed and see how much it costs.”