ROYAL Bank of Scotland is dishing out free dollars and drinks at Dunkin Donuts to its American customers – while going cap-in-hand to the UK Government asking for more bail-out cash. 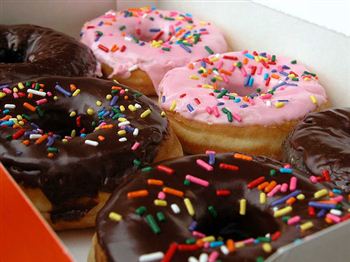 The financial giant owns USA-based Citizens Bank and Charter One Bank, which are currently offering $220 (£120) to anyone who opens a new account.

Citizens Bank has even opened a branch in a Boston Dunkin Donuts outlet, offering a month-long free coffee subscription with new accounts.

The Taxpayers’ Alliance hit out at the “super gold-plating” of American customers.

They claimed it was “insulting” to offer the sweeteners to American customers while UK taxpayers’ money is being used to prop up RBS.

But the bank said their offers lured in “tens of thousands” of new customers.

Boss Stephen Hester said they had an immediate requirement of £13billion to keep it afloat. 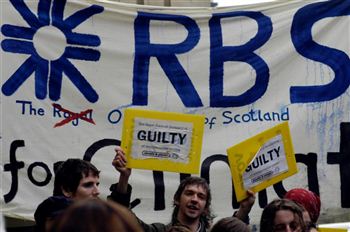 Yet just weeks beforehand, the RBS-owned Citizens Bank was literally giving away money in a game show-styled “Cash Cube” to celebrate the opening of a cash machine in a Dunkin Donuts shop in Bellingham.

Players walked away with as much money as they could catch from the air.

The cash giveaways angered Matthew Elliot of the Taxpayers’ Alliance.

He said: “UK taxpayers and RBS savers in Britain will be outraged by this kind of marketing activity.

“In the week when every one of us was giving an extra £500 per person to RBS to keep it afloat, it’s a slap in the face to existing UK savers who are getting extremely poor returns.

“The idea that Americans are being super gold-plated, when customers in the UK are propping-up the state-owned RBS, is rather insulting and needs to be addressed.”

Martin Bischoff of Citizen’s Bank said: “Our recent offers have enabled us to attract tens of thousands of new Citizens Bank and Charter One customers.

“As part of our focus on exceptional service, we look forward to providing our customers with banking solutions to achieve their financial goals.”