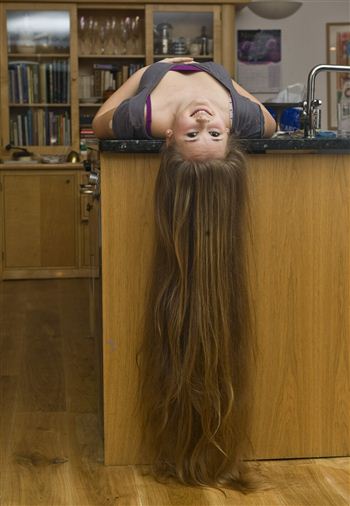 A 16-year-old Scots girl has accepted a hair-raising challenge for charity – to lose the metre of mane that she’s been growing for more than a decade.

Francesca Dawson is preparing herself for the chop after growing her fairytale-like blonde barnet since she was just five.

And even though she’s had years of strange stares and nightmare tangles, the Edinburgh teen reckons she’s still nervous about losing it all for a sensible bob.

Francesca said: “I’m scared because in a way my hair has become my identity.

“But at the same time I’m excited because it will be nice for people to see through my mass of hair for once.“I do like the attention it gets, but I’d like to be noted for other things as well.

“I’ve been thinking about doing it for a few years now but never had the courage.

“Doing it for charity gives it a purpose and now I’ve hit 16, it’s time for a change.”

Her mum Karen said that she knows what Francesca is going through – having had a 4ft mane of fair hair herself.

She said: “I used to have hair down to my bottom and my mother could wrap her pleat around her head three times.

“It is in our genes and our hair length seems to be predetermined.

“I had my hair long until I was 30, but it did get very frustrating.

“There is very little you can do, you can’t put it up because it’s too heavy and you constantly sit on it.

“I remember feeling regret when I had it chopped, but I don’t think Francesca will regret it, because I did it on a whim – I still have all the hair though.

“Having long hair does help it stay in good condition.

“You don’t dye it or style it with heat products, so it stays healthy.”

Francesca is currently collecting cash for Children in Need, and is due to lose the locks on 20 November.

Celebrity stylist Charlie Miller said that the he was looking forward to shearing a whole metre off Francesca’s hair.

He said: “We’re happy to help anybody if we’re doing it for charity, so it was an automatic yes from us.

“It won’t be a difficult cut, we’ll snip about a metre and style it however she wants.

“We’ll also make sure we take it off in one go so it can be made into a wig.”

And despite the nerves, Francesca she won’t miss the stares in the street that she currently gets, saying: “I get extra attention if I’m with my best friend because she has very curly hair – so I get called Rapunzel, while she gets Goldilocks.”

The brave teen hopes to either sell the massive pile of hair to raise money for the Sick Kids’ Hospital, or donate it to Teenage Cancer Trust, to be made into a wig.