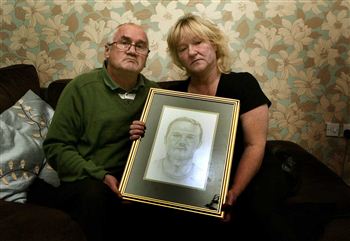 By Oliver Farrimond and Rory Reynolds

THE FAMILY of a Scot killed in Spain are demanding an inquiry into his death after it has emerged he may have been attacked and robbed before he died.

Thomas Patterson, 21, was hit by a car while crossing a dual carriageway at Playa Flamenca, near Alicante, in July of this year.

Police cleared the single driver of any wrong-doing,.

But his 52-year-old mum Agnes has spoken out, saying that the Spanish police “wrote off” her son, the father of an 18-month-old boy, as a “drunken lout”.

Her calls for justice come as one of Scotland’s most senior judges has recommended that Fatal Accident Inquiries (FAIs) be held for Scots who are killed abroad.Mrs Patterson is upset that the question of an assault prior to her son’s death was never investigation, and that the driver of the single vehicle was never breathalysed.

Mrs Patterson, from Moredun in Edinburgh, said: “The Spanish police just dismissed my son as another British lager lout who died from acting like an idiot abroad.

“The undertaker said it looked like he had been hit by a truck going at 100mph, rather than a single car obeying the speed limit.

“I had to identify Thomas, you know, in case it wasn’t him. I screamed and collapsed when I first saw him.

“He was in a shocking state. I could only look at one side of him, but his ear had been sliced straight off and his lips were blown up, really puffy, even though he had very thin lips.

“His knuckles were swollen and raised, like he’d been in one hell of a fight.

“I’d understand if he’d had smashed through the windscreen or gone under the car – but he’d just been knocked down.

“Also he was taken to forensic lab in Alicante that the Spanish journalists told us is used for violent deaths, not accidents.

“Believe me there were plenty signs of violence.

“There are too things that we don’t know – it can’t just be that.

“He also had quite a bit of money on him before he died, following a big win at the bookies that afternoon.

“He should have still had about €300 on him, but when police recovered his body, all they found on him were two telephone numbers, for me and his girlfriend Allana.

“Now we’ve got to hire a lawyer in Spain to get a Spanish judge to release the police report of what happened.

“That’s how hard it is to find out what happened to my son.

“And I can’t get legal aid here because he died in Spain.

“We can’t afford to find out the details of our own son’s death, how ridiculous does that sound?”

The body of Thomas, a roofer from Moredun in Edinburgh, was found at 3.30am in the coastal region of La Zenia, one mile away from where he was last seen alive.

Thomas, known as “Top Cat” or “Tam” to friends, was reportedly last seen alive while arguing with an angry mob.

A spokesperson for the Guardia Civil said that the driver of the vehicle which killed Mr Patterson was not arrested because the victim had crossed the road in an area where pedestrians are banned.

Mrs Patterson added: “If he was killed in similar circumstances in Scotland, the police would have questioned his companions, breathalysed the driver and looked at all the circumstances leading up to his death.

“But the Spanish just wrote him off as a drunken lout.

“International FAIs are the only way to make sure that the deaths of Scottish people get investigated properly, wherever they are in the world.”

Lord Cullen, who presided over the inquiries into the Piper Alpha platform fire, the Dunblane school shooting and the Paddington rail crash, last week urged that hearings be made available for Scots who die abroad.

He made the recommendation in a major review of the 33-year-old legislation, saying that such a hearing should take place at the Lord Advocate’s discretion.

Andrew MacKenzie, secretary to the Review of Fatal Accident Inquiry Legislation, said he could not comment on individual cases.

But he said: “In his report, he recommended that the Lord Advocate should have power to apply for an FAI into the deaths of persons normally resident in Scotland where the body is repatriated to Scotland.

Speaking about the Scottish Government and the Spanish Police, Agnes added: “I’ll be a thorn in their side until we find out what happened to Thomas.

“And our children will carry on with this until we know.

“How can I explain to his son TJ that he wasn’t some drunken lager lout when everybody seems to think that’s what happened?

“I’m doing this for us, but I also want to do this so that mothers and fathers and sons and daughters can find out what’s happened to their relatives when something like this happens.

“We are entitled to know how our bairns died.”