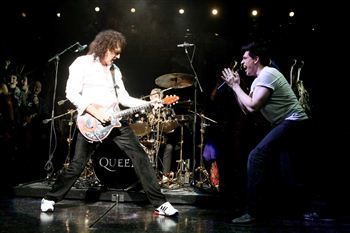 SCOTLAND rolled out the red carpet to welcome legendary rock stars Brian May and Roger Taylor for the opening night of the hit musical We Will Rock You.

The Queen legends wowed fans at the Edinburgh Playhouse with a live appearance at the show’s finale, which saw the audience clap and sing along throughout the whole show.

And the crowd went wild when May and Taylor belted out the band’s classic hit Bohemian Rhapsody.

We Will Rock You, which has received rave reviews during its run at London’s West End, is written by Ben Elton, with the show’s music being supervised by Taylor and May.

May, 62, said he was delighted to be back in Scotland on Monday, if only for one night.He said: “I love being in Edinburgh, my mother is Scottish, so it’s like coming home for me.

“I thought the audience were amazing, they were very responsive – it went really well.”

TV presenters Carole Smillie and Anthea Turner were among the audience along with Any Dream Will Do finalist Keith Jack.

Anthea said she had come along to support her friend Darren Day, who plays villain Khashoggi.

She said: “I thought it was fantastic, I’ve known Darren for more than 20 years, so I wanted to come along and support him.

“I’ve seen it before, but I think it was tighter this time and more polished.

“It was nice to see him do something a bit different.”

Thousands of screaming fans turned up over an before the doors opened at the Playhouse theatre in Edinburgh, and the party continued afterwards at Harvey Nicols’ Forth Floor restaurant in St Andrews Square.

The show will run from 10 January to 9 January.

Brian May to go vegan in January with Veganuary