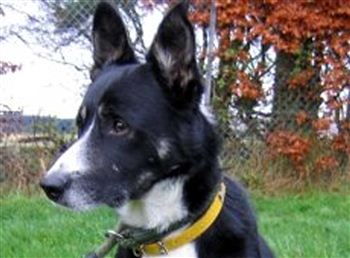 A TERRIFIED dog has been taken into care after being dumped by its owner – in a pub toilet.

Dingo the Border collie was found by staff at the Standing Order in Edinburgh after being abandoned – at 10am in the morning.

Pub staff said the dog was very nervous and very lean – so they fed him a whole plate of black pudding.

Now staff at the pub are considering adopting Dingo, and reckon he could get used to black pudding breakfasts.

Charlene Walshe, manager of the Standing Order: “The gentleman came in at about 10.45am in the morning and headed straight down to the toilets.

“The staff could see him looking around on the camera in the toilets, and then tie the dog up with his lead.

“Then he just walked straight out.

“We went down found him looking quite scared, I almost cried when I saw him looking all sad.

“We called the SSPCA and our staff stayed with him to reassure him.

“He looked quite thin, not malnourished but maybe a bit underfed, so we gave him a whole plate of blacking pudding and he looked pretty happy after that.”

And the 24-year-old said she’s even thinking about adopting Dingo herself.

“I’m considering going to get him and taking him home but I’ll have to see.

“We’re not allowed dogs in the pub and I’m hardly at home.”

She joked: “Maybe if I pretend he’s my guide dog I can bring him to work with me.”

Scottish SPCA Inspector Heather Lawson said officers from the SSPCA took Dingo their Edinburgh centre to be looked after, and are investigating the incident, which is a criminal offence with a penalty of up to six months in prison.

She added that they were appealing for witnesses who may have seen Dingo or his owner.

She said: “A man, aged around 25 to 30 and wearing a white jacket and a white beanie hat, was seen walking into the Rose Street entrance to the pub and upstairs towards the toilets with the dog.

“We are very keen to speak to anyone who recognises either the description of the man or the dog.”

Dingo is now settling in at the SSPCA’s Edinburgh centre, where he will be looked after until he finds a new home.