PROUD veterans at the Erskine Army Recovery Centre in Edinburgh laid wreaths yesterday in memory of their fallen colleagues.

Veterans from conflicts from the Second World War to the present day took a few solemn moments to reflect on private memories of service, as well as current British Army operations in Iraq and Afghanistan.

Conducted by Reverend David Dixon, the Armistice Day service was held in the gardens of the home in the Gilmerton area of the Capital.

Lieutenant-Colonel Leslie Barr, 85, served with the Oxfordshire and Buckinghamshire Light Infantry after the Second World War, and said that the service gave him the opportunity to remember his own father, who died in Australia after being gassed.

He said: “Today is the actual remembrance day, which we’ve had now for a number of years, so here we are on the eleventh day, the eleventh month and the eleventh hour. 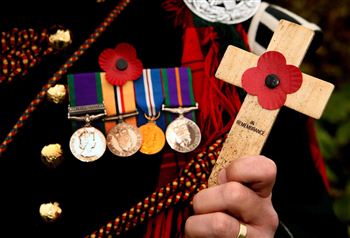 “This service means a lot to me because my father was gassed, and he died on an operating table in Queensland, Australia, when I was quite young.

“There are so many things happening in this world that it does one a lot of good to remember the past, and to remember that we owe a great deal to those who have gone before us.“

As well as a two-minute silence, and a bagpipe performance of Flowers of the Forest, a verse from Robert Laurence Binyon’s war poem “The Fallen” was read by Erskine operations director Keith Taylor.

Mr Taylor, who served with the Royal Navy for 22 years, said: “We’ve had our remembrance service here today to give the residents of our Erskine home the opportunity to reflect on their service, and their comrades.

“It also gives everyone the opportunity to give some thought to those currently on operations.

“I thought the service was very well attended by residents, their families and supporters.

“I think everyone from their period of service has their own private recollections, and it’s very important that they’re given the opportunity to reflect on them.

“It’s also nice to have everyone together for that personal reflection. 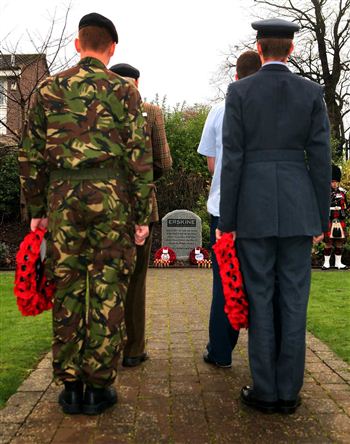 “It’s an ideal opportunity for our residents to give some thought to the servicemen and women currently on operations in Iraq and Afghanistan.”

The service has been held annually at the Erskine home since its opening in 2001, and this year’s ceremony was the first since the opening of the new Army Recovery Centre.

The dedicated centre provides support for the recovery of soldiers wounded during duty, and includes 12 beds and state-of-the-art physiotherapy equipment.

Major Roddy Sutherland, commanding officer of the recovery centre, said: “I thought today’s service went very well, and it’s particularly good that we had current soldiers there today, as well as veterans from the Second World War and conflicts since then.

“It’s important to remember the self-sacrifice of soldiers who’ve been there, and who have put their lives on the line.

“I think that public recognition of what soldiers are doing has increased.

“They’re fighting for their country, and for their friends and family, and more soldiers are dying on operations.

“I think the public recognise this at the moment, and that’s why there’s been so much emphasis on Armistice Sunday this year, and of Armistice Day itself.”