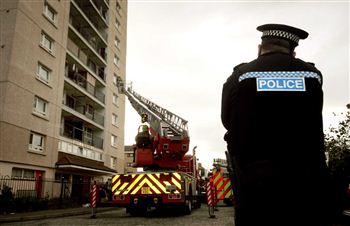 A FAMILY was rushed to hospital following a fire in an Edinburgh high rise flat.

The three residents – which included a toddler – were treated at the scene by ambulance workers but were then taken to Edinburgh Royal Infirmary early this morning.

Fire crews were alerted to the ground floor blaze within Fidra Court on Pennywell Medway near Granton at 8am and spent more than two hours ensuring the 14-storey flat was safe.

The 15 firemen present used breathing apparatus to search the building and one fireman spoke to residents on their balconies using an extendable platform.

Police have now launched an investigation into the fire after they discovered a rubbish bin had been deliberately set alight.

“The fire started in the ground floor where there are no flats, but smoke travelled up the lift shaft and spread into the upper flats.

“Residents opened their doors and were met with a wall of smoke so we had to keep everyone else in their flats and clear the smoke from the stairwell.

“The family were not rescued but are believed to have left the flat after coming into contact with the smoke.”

A 15-year-old boy has been detained by police in connection with the incident.