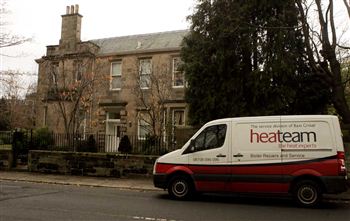 SHAMED banker Sir Fred ‘The Shred’ Goodwin will try anything to come in from the cold, even having his boiler serviced.

The 51-year-old former chief executive of the Royal Bank of Scotland has been feeling the heat since details of his £342.500 per year pension and £2.7million lump sum became public knowledge.

He recently returned to his Edinburgh home after spending several months abroad.

The detached house, estimated to be worth £3million is in one of the capital’s most salubrious areas, was vandalised following the near collapse of RBS.

The police response of 18 officers, including five detectives, forensic specialists and a police dog handler, sparked anger from other victim of similar crimes.

Yesterday, as his gardener tended to the autumn leaves in garden of his house, a Heateam Boiler Services and Repair van was parked in the double driveway.

Keeping with his policy of only accepting the best, Heateam was recently voted one of the top 50 call centres for customer service.

The study was conducted by independent market research company GfK NOP, who made 16,800 mystery shopper enquiries to the call centres to identify the best performers.

While this will ensure that Sir Fred has a cosy Christmas, the same cannot be said for many of his former staff.

Last week, RBS announced plans to shred 3700 jobs, despite an additional £25.5 billion of public money being pumped into the bank.

It is understood that, despite his attempts to maintain a low profile, Fred is determined to rebuild his tarnished reputation. 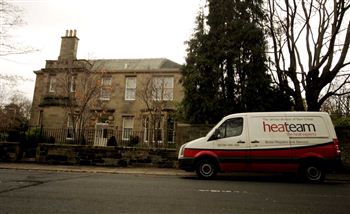 , at Edinburgh’s Prestonfield House Hotel, but decided against bidding for any of the luxury items included in the charity auction.

These included a pheasant shoot at Teasses estate near St Andrews and a day with Andy Murray.

Perhaps he would have preferred ‘ take a chance on me.’