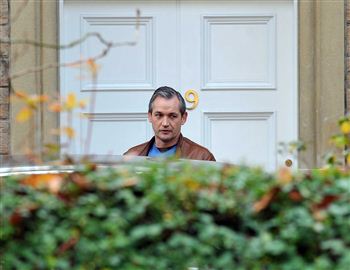 UNDER FIRE Scotland boss George Burley looked like a man condemned leaving his Edinburgh home just hours before he was sacked.

The Cumnock-born manager refused to come to the door of his house to be interviewed yesterday as speculation over his future intensified.

Instead it was left to wife Jill, who has been married to beleaguered Burley for 30 years, to say he had nothing to comment.

Shortly afterwards she moved the sporty family Jaguar XJ into place directly outside their front door so he could jump straight in and they made a quick exit with her at the wheel.

If only his below par Scotland side could have stepped up a gear so quickly.