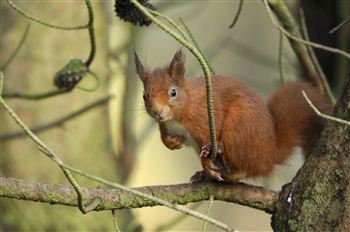 THE crowning place of Scotland’s kings is to be the site of a battle for survival for one of the nation’s most endangered creatures.

Scone Palace, where Robert the Bruce and Charles II were crowned king of Scotland, is to be awarded funding to battle the invading grey squirrel, in order to protect the red variety, which is native to Scotland.

The red squirrel – of which only 160,000 survive in the UK – has been struggling for survival since the rise of the diseased grey squirrels, which campaigners say plague Scotland.

Scone Palace has said it will develop a trapping scheme for the grey squirrel, while working on a conservation area to protect the red variety.

Ken Neil, at Saving Scotland’s Red Squirrels’ said: “Unlike grey squirrels, which were first imported into this country from America in 1876, the red squirrel is native to the UK.“The relentless spread of greys, coupled with the squirrelpox disease that they carry, poses a real threat to the whole red squirrel species in Britain.

“With only 160,000 red squirrels left in the UK, most of which are in Scotland, it is imperative that we take action now to halt the grey squirrel in its tracks and foster a habitat in which the red can not only survive but thrive.

“The vast majority of grey squirrels are found below a line from Montrose to Loch Lomond, but without action by landowners it’s only a matter of time before they migrate into the Highlands.

“This would spell absolute disaster for one of our best-loved native species.

“We believe that only a concerted effort to build defences on an estate-by-estate basis can stop the spread.”

The Scone Palace project will begin in January, and is the first organisation to be awarded funds to protect red squirrels by the Scottish Rural Development Programme.

Ken Neil added: “We hope that Scone’s success in achieving funding for this project will provide encouragement to other landowners in Tayside, and that we can look at developing similar projects on other neighbouring estates”.

Elspeth Bruce, Administrator at Scone Palace said: “When we heard about the project we were very keen to be involved. Red squirrels can still be seen in the grounds of Scone Palace, but in common with other estates the numbers we have seen recently are diminishing.

“We are delighted to be able to play our part in a project which aims to ensure a positive future for these beautiful little creatures”.