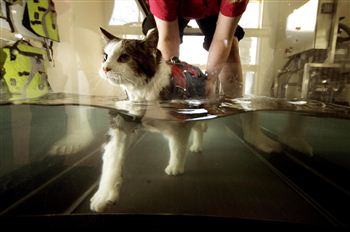 INJURED cats have been taking a new route to perfect health – by getting their paws wet.

A state-of-the-art veterinary practice in Haddington, East Lothian, submerges crippled kitties in a foot of water on a treadmill to rehabilitate their injuries.

One such soggy moggy is George – a 14-year-old obese cat who has been shedding the pounds by running underwater.

Chartered veterinary physiotherapist Maeve Grant, who looks after many of the centre’s feline visitors, said that the treatment was an excellent alternative to pain-killers for injured cats.

She said: “Our ethos is to rely on pain-killers as much as possible, and to try to find different methods of controlling the pain.

“We’ve had a lot of success with weight loss using the treadmill and the pool.

“Because there’s water there, they have to walk into the resistance of the water, so it works the muscles quite hard without putting too much pressure on the joints.

“The therapy isn’t common for cats – George is the only cat that we treat with the water treadmill.”

She added: “George is fine after he’s been on this, and the owners say he just goes to sleep when he gets home – he’s quite a laid-back cat.”

George has already lost over half a kilo of excess weight after undergoing the gruelling treadmill regime for the past 10 weeks.

She said: “I think it’s done really well because he’s getting a lot fitter, and he’s lost a lot of weight as well.

“And he doesn’t seem to mind at all – in fact, he seems to enjoy it quite a lot.”

The cutting-edge treatment takes place at the £1.6 million Lothian Canine Rehabilitation Centre which offers treatments to both dogs and cats, in and out of the water.

The centre, newly open in September of this year, is expected to attract a further 2,000 patients a year alongside the existing practice Links Vet Animal Hospital.