THE historic site of what was once the former ‘Fleet Street of Scotland’ will be relaunched tonight as a multi-million pound luxury hotel.

Fraser Suites have taken over a restored Grade B Listed Building, which was once home to the Edinburgh Courant offices in the 19th Century.

As one of the UK’s first regional newspapers its editors included such well known names as Robinson Crusoe author Daniel Defoe.

The street near the Royal Mile in Edinburgh, also housed a number of national newspapers, making it Scotland’s press headquarters of the day.

Several top Singaporean executives from Frasers Hospitality travelled to Edinburgh for the opening of the Fraser Suites on St Giles Street today.

The move – which comes in the face of the worldwide recession – is now being viewed as a major sign of confidence in the Scottish tourist market given the increased importance of travellers to the economy.

Sinead Feltoe, VisitScotland’s Regional Director said: “Tourism growth is critical to the future of Scotland and so it is extremely encouraging to see Frasers Hospitality opting for this expansion in Edinburgh city centre.

“With its rich heritage and an innate sense of style, Edinburgh is the ideal destination for such a development.

“In the current economic climate this sort of confidence and investment is more crucial than ever and today’s launch further strengthens Edinburgh and indeed Scotland’s position as a truly outstanding visitor destination.”

Councillor Tom Buchanan, Economic Development Convener at the City of Edinburgh Council, said: “Business tourism is a vital element of the city’s economy and Frasers Hospitality’s decision to locate here shows that Edinburgh is seen as a well-respected destination for businesses across the globe. 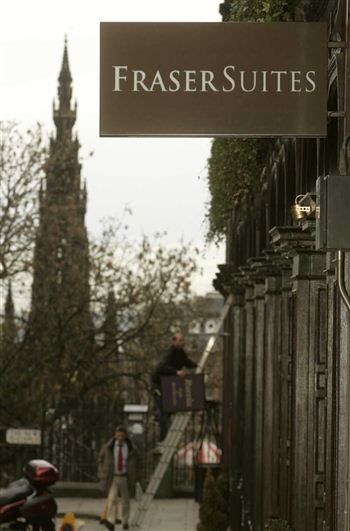 “We look forward to working with the company, which has its roots in Scotland, to harness the opportunities of their extensive business network.”

The Old Town site had lain empty since 2007 after being laterally used as university student accommodation and as Edinburgh City Council offices.

Today (wed) the new venture was hailed as a “landmark” event.

Guus Bakker, Frasers Hospitality Chief Operating Officer for Europe and the Middle East, said: “Our other premises across the world are all luxury serviced apartments, so Fraser Suites Edinburgh actually represents the first ‘boutique hotel’ investment for the Group.

“Because of the nature and location of our building in Edinburgh, we realised that it would be better suited to hotel accommodation rather than comprising exclusively of apartments.

“This represents a significant multi-million pound investment for the Group and one which we hope will help us strengthen our position in the Scottish tourism industry.”

Heather Gilchrist, Regional General Manager Frasers Hospitality Scotland, said: “We have gone to great lengths to preserve and reinvent this fantastic building, retaining the original features, including high ceilings and ornate cornicing, and carefully blending these with contemporary designs and finishes.”

“It is a landmark development, not just for Frasers Hospitality, but Edinburgh as a whole. It’s brought back to life a prime city centre site and provides a new benchmark in high quality accommodation.”

Acclaimed architects Holmes restored the historic building, working for to transform the derelict shell to a luxury boutique hotel.

Frasers Hospitality now operates 12 European properties, with eight in London, one in Glasgow and two in Paris.

Frasers Hospitality also has serviced residences in the Far East and Australia, and will open new properties in New Delhi, Osaka and Doha next year.