A LUSTY couple who appeared in court after being caught enjoying a mid-morning romp in a public telephone box bragged: “We can’t help ourselves – we’re sex addicts.” 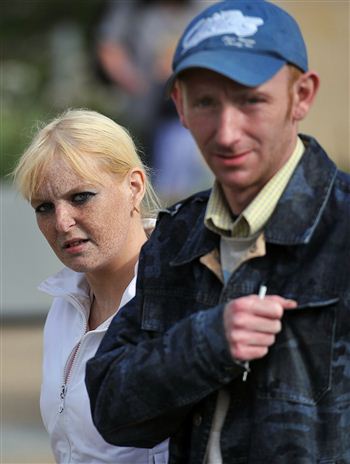 Randy Greig Forbes, 29, and fiancé Sarah Meikle, 23, were clocked in a steamy clinch by customers and staff – just yards from a nearby chemist.

They were arrested and admitted their raunchy antics right away before being charged with a sexual breach of the peace.

At Livingston Sheriff Court the pair pleaded guilty to committing a sexual act in public.

A not guilty plea to a second charge, claiming they also romped in a busy shopping centre, was accepted by the Crown during a hearing before Sheriff Ian Fleming.

Now the sex mad pair must wait for background reports to be presented to the court before learning their fate.

Following the hearing, the couple claimed they were “sex addicts” and “couldn’t keep their hands off each other”.

Meikle said: “We have been engaged for about a year now and are totally in love.

“We do it (sex outdoors) quite often, you’re young and you have to experiment.

“Our friends always say we have some sex life, they all think it is funny.

“We just can’t help ourselves – we can’t keep out hands off of each other.”

Forbes added: “We are sex addicts – we have sex all the time.”

Earlier Fiscal depute Danielle Clark had told how staff at a nearby chemists spotted Meikle performing a sex act on Forbes near their home in West Calder’s Main Street in West Lothian on May 1 this year.

Miss Clark said: “At about 9.45am a witness within McBride’s Pharmacy saw both accused within the public telephone kiosk which is directly outside the pharmacy.

“The witness then contacted the police to report the incident.

“At the time of the offence the pharmacy was populated by numerous staff and customers.

“When interviewed both accused made full admissions.”

Miss Clark accepted a not guilty plea to allegations that the couple also performed a sex act in the Almondvale Shopping Centre in Livingston on April 30.

The pair said they were hoping to go to college to study cake decoration in the hope of starting a wedding cake business together.

They will be sentenced next year.