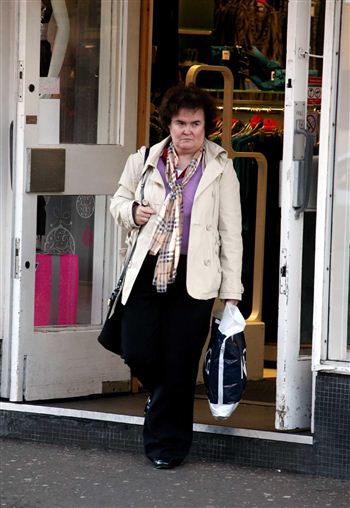 SUSAN Boyle has spoken about her meteoric rise to fame on the day that her album is released worldwide.

I Dreamed a Dream – the debut album from the 48-year-old – hits shops today (Mon) having already sold more pre-order copies than any other album on internet shopping website Amazon.

It is just another achievement for the spinster from Blackburn, West Lothian, who shot to fame after her appearance on Britain’s Got Talent in April.

And she has spoken for the first time about how it feels to get so much attention, and insists she is still “a wee wifey from Blackburn”.

Whilst staying at the five-star Peninsula Hotel in LA – where SuBo performed on Dancing with the Stars – it hit home how much life has changed for the star.

She said: “What a beautiful place it is. My pillow had the initial B embroidered on the pillow – little things like that made me realise how much my life has changed.”

And she went on to say that not winning the final of Britain’s Got Talent was a “relief”.

She said: “When it was revealed Diversity had won, there was actually a sense of relief.

“It was like an immense weight on my shoulders had suddenly been lifted. I was glad they won. They are a good bunch of lads and I wish them all the best.”

It seems that although fame is a welcome surprise for the international star, she will always remain grounded.

Susan said: “Who would have thought the wee wifey from Blackburn would have achieved so much in just 11 months?

“It’s taught not to give up and to keep going no matter what your difficulties are.”

The star showed that she is still down to earth when she jumped on a bus to go shopping in her favourite shop M&Co in Bathgate last week.

Smiling and posing for pictures with fans, she popped in to buy a longline cardigan and two pairs of trousers from the budget shop.