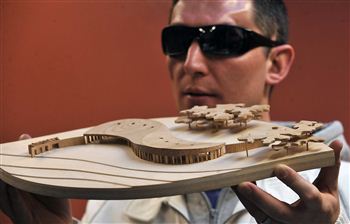 Ben Shaw holding the model of the new centre

THE SCOTTISH War Blind celebrated the start of work on their multimillion pound facility yesterday (Tues).

The new centre is backed by Iraq hero Ben Shaw, 26, who lost his eyesight in a roadside bombing near Basra in February 2007.

As the charity’s youngest user, it is hoped the new Linburn complex – which replaces the run-down 1940s building – will provide brave war veterans like Ben to get the vital help and support they need.

Costing £3 million, the services in the new centre will focus on teaching the ex-servicemen and women how to cope with modern life without their sight.

As well as those recently injured in the line of duty, the charity also assists older clients who are suffering from worsening or progressive blindness.

When the existing building first opened in 1944, the organisation provided vocational training for those returning from war with visual impairments.

But nowadays the focus has evolved towards helping soldiers rebuild their social and life skills, developing hobbies and providing a community for them.

Ben was on his second tour of Iraq when he was severely injured by a roadside bomb outside of Basra.

His vehicle was thrown into an oncoming petrol tanker and he was wounded by shrapnel.

Ben’s comrades dragged him out of the wreckage and drove straight to the British Military Field Hospital.

The soldier can’t remember a lot of what happened to him at the time.

He said: “I have flashes of memory, although a lot of it has gone.

“I can remember arguing with one of the guys about batteries for equipment, and the last thing I remember seeing was a friend holding a towel to my head as we were on the way to the hospital.

“I still had sight in one eye at that point, and I was looking up at him as he told me I was going to be OK.”

One of Ben’s eyes was lost in the explosion and surgeons were unable to save the other as the optic nerve had been severed.

He said: “Since the 1940s, the needs and demographic of those we support have evolved and we are committed to ensuring our facilities are suitable for the generation in which we are operating.

“This new facility is essential in bringing our services up to date, providing effective support and skill development and ultimately delivering what our beneficiaries now need.”