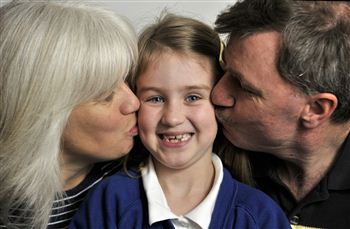 A SEVEN-year-old girl who saved the life of her mum after a seizure has said she learned what to do by watching Children In Need.

Police praised Leah Grant for her “quick thinking and bravery” after she carefully checked her mum’s breathing before calling 999.

She climbed into her mum’s bed feeling unwell herself on Sunday morning, but discovered that her mum became confused when Leah spoke to her, before suffering violent convulsions and rolling onto the floor.

The brave primary three pupil checked her mum’s breathing, before calling 999 and describing her mum’s condition to an ambulance services operator

Then little Leah, who lives in Linlithgow, West Lothian, ran to a neighbour’s home to get help for her mum Grace.She said: “I came to ask my mum where my blanket was, but she didn’t make any sense when she answered me.

“Normally she would just tell me where it was, or help me find it.

“That’s when I knew something was wrong.

“I had seen a programme on Children in Need where an eight-year-old saved his dad and that’s how I knew to call 999.

“Mum was still breathing so then I called 999 and did what they told me.

“I said my mum had fallen on the ground and I didn’t know what was happening.

“They told me to put my mum on the phone but she was too confused to talk.

“I kept checking she was OK then I went out to find a neighbour to help but they weren’t awake yet.

“Then one of my neighbours saw me running past his window and he came to help when the ambulance came.”

Grace, who has since recovered, was given a CAT scan at St John’s in Livingston, and will soon have tests at the Edinburgh Royal Infirmary to allow doctors to discover the cause of the unknown seizure.

Grace, 47, who is a lab technician at Edinburgh University, said: “Leah didn’t hesitate – I don’t think I would have been as calm as she was and I am so proud of her.

“She realised there was something wrong before I fell out of the bed – she said my eyes had gone very big.”

Her husband Robert, 44, said: “We’re very proud of Leah, who is mature and sensible for her age.

“She not only gave the paramedics her address, she even gave them her postcode too.”

A spokesman for police said: “If it wasn’t for Leah’s bravery and quick thinking emergency services might not have got to her mother and it could have ended a lot worse for the family.”