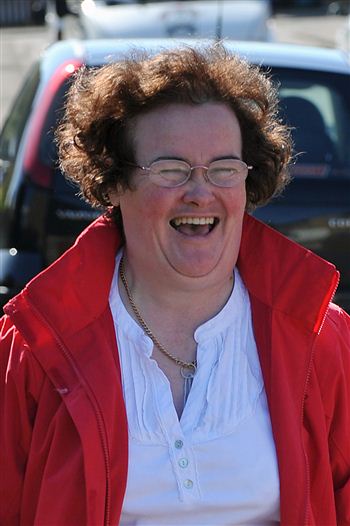 SUSAN Boyle shrugged off claims that she had a break down during her visit to America earlier this week as she signed autographs for fans outside her home in Blackburn.

The star has been pictured in tears as she was surrounded by fans in New York’s Rockefeller Centre, where she was doing a live performance for NBC’s Today show.

But she said that her trip had been “absolutely brilliant” as she proudly posed with her debut album.

Casually dressed in a cream jumper and sporting a black beret adorned with jewels to keep away the cold, the 48-year-old waved to passers-by on the narrow street where she lives.

Looking happy, she said that she hoped people would like her album.

I Dreamed a Dream is set to be number one in the album charts this weekend, after setting the highest first-day sales of the year with a whopping 130,000 copies flying off shelves.

And it is on track to beat the highest first-week sales of 375,872 for a debut album, which was set by Leona Lewis two years ago.

The CD is dedicated to the singer’s mother – Bridget Boyle who died in 2007 – and each song was chosen by SuBo because it had a special meaning.

Her management strongly denied that the Britain’s Got Talent performer had a breakdown whilst in the States, saying that she was overcome by emotion after receiving a quilt from fans.

A spokesman for Susan said: “She was just overjoyed and extremely touched with the reception she has had from everyone in America.”