Harry Potter book to be auctioned for kid’s charity 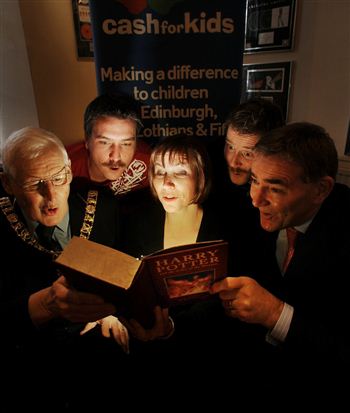 A FIRST edition of a Harry Potter book is expected to conjure up thousands of pounds for an Edinburgh children’s charity.

The rare signed copy has been given to Radio Forth’s Cash for Kids appeal from the city council who had 30 stored in their secret chambers.

Best-selling author J.K. Rowling had given the copies of Harry Potter and the Order of the Phoenix to former Lord Provost Lesley after it was published in 2005.

The valuable books normally sell at auction for up to ?8,000 and all the money raised will help disadvantaged children.

Most of the books are given to children as prizes and Ms Rowling donated the books to her adopted city – where she penned the first Harry Potter novel – on the condition she would approve each one that was handed out.

Lesley Fraser-Taylor, charity manager for Cash for Kids, said she had been very surprised to receive the book.

She said: “Usually we get a nice crystal decanter or something like that from the Lord Provost.

“But this year, he phoned to say they would like to donate a book signed by JK Rowling.

“They had to check it with her, as she only allows them to be given out to the children who have done something special.

“Very few have been released for charity. It’s wonderful that she has agreed.

“This year we’re having out very first auction online. Having such a special item as a book will help raise the profile and help even more children.”

Cash for Kids has raised more than ?2.5 million for children with special needs for more than 30 years.

Other items up for grabs on the online auction include a signed guitar owned by KT Tunstall and a signed framed photograph of Will Young.

The auction will be open for bidding until 6pm tonight (Saturday).

Lord Provost George Grubb said he was delighted to hand over the book on behalf of the city.

He said: “Radio Forth have done an amazing job with the Cash for Kids appeal, raising millions of pounds to brighten the lives of special children across Edinburgh, the Lothians and Fife.

“I wish the campaign every success.”