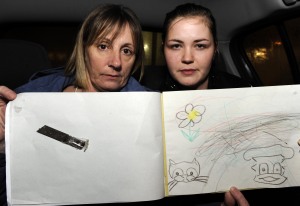 A TWO-YEAR-OLD boy had a lucky escape after a four-inch blade was found inside his new colouring book – bought by his grandmother only minutes before.

Grandmother Elizabeth Borthwick was shocked to find the razor-sharp weapon taped to the inside of the drawing pad.

The 46-year-old was sitting with her grandson Ryan Wilson and Ryan’s mum Kerrie Kinghorn on the living room floor with the stationary set when the discovery was made.

She said: “He flipped the book over and there was a four-inch blade stuck to the book.

“It’s like a Stanley knife blade and there’s Sellotape wrapped round the bottom.

“Myself and my daughter-in-law couldn’t believe it. We looked at each other in pure shock.

“If we hadn’t been sitting there, he would have picked it up and his fingers would have been cut to shreds.

“Both ends of the box were taped down with Sellotape and I had to break it with my nails to get the books out, so I don’t think it had been tampered with in the shop.”

Police advised the family, who lives in Prestonfield, Edinburgh, to return the set to Londis on Niddrie Mains Road where they had bought it.

He said: “I was shocked – obviously my concern was for the wee one.

“It comes in boxed from the wholesalers, I’ve phoned them and told them what happened and they said they don’t really know where the blade would have come from.

“We’ve got safety cutters here, so it can’t be from us.

“Everything that we’ve removed from the shelf we opened as well, to double check, and there’s nothing in the rest of the packs.”

She said: “I didn’t think anything like that would have been in a kid’s package.

“We just didn’t know what to do.

“We had to take it off Ryan and he didn’t understand, so he was really upset.

“It’s definitely not something that would have been lying in the house. He literally had it five minutes and it was my mother-in-law that opened it and gave it to him.”

The product was produced by RMS UK Ltd – who are based in Manchester – said they would be contacting the manufacturers in China.

David Beaumont, quality control manager for the company, said: “Obviously one issue like this is one too many but we do sell hundreds and hundreds of thousands of different items every year and this is the first complaint we’ve had about a blade in a product this year.

“I only remember one previous incident, some time ago.

“It’s a terrible thing to happen with these products, but because of the nature of the beast will, one time in a million, happen.”

Upmarket residents told to sleep with their keys

Sexual predator back in court for frightening boy