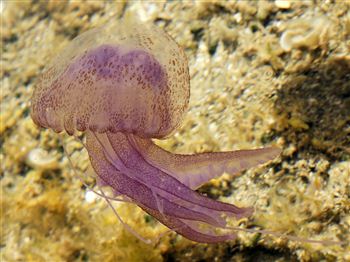 SCOTLAND is under threat of being besieged by a massive horde of exotic killer jellyfish.

Numerous sightings of the mauve stinger – which devastated salmon farms on the west coast in 2007 – have led experts to believe that the Mediterranean creatures have returned to Scotland’s coasts.

The tiny critters, who travel in massive swarms or ‘blooms’ – numbering billions – also caused over £1million of damage when they decimated more than 100,000 fish in Northern Ireland.

The latest bloom was spotted last week off the coast of Orknay, with others seen near Lewis and Fair Isle.

The Marine Conservation Society said that recent turbulent weather and a slight rise in sea temperature around Scotland could mean that the red swarm may become a familiar sight in the North Sea.Fisherman John Franklin from Tobermory, Mull, spotted one bloom when he was sailing of the coast of Skye.

He said: “I was out in the boat when I saw a couple of tiny jellyfish, then I saw more, then I realised there were millions of them.

“There was a bright red mass 30 yards wide that stretched perhaps 200 yards.

“It was like a river of blood cutting through the sea – heavens knows how many there were.

“I didn’t hang around for fear they’d clog the outboard motor.

“I’m 73 and I’ve been fishing for more years that I care to remember and I’ve never seen anything like it.”

The stinger has a powerful sting that can cause a severe reaction in humans, and also emits an eerie glow if interfered with.

Near the creatures’ native Mediterranean sea, whole coastal resorts have closed after millions washed up on the beaches, denting the tourism industry.

The largest bloom seen in Scottish waters is believed to have covered 10 square miles, with a depth of 35 feet.

Marine scientists say they aren’t able to predict if there will be a repeat of the devastation of 2007, but they added there is little that fish farmers can do except for harvest their stocks early.

A spokesman for the Marine Conservation Society said: “The mauve stinger is an oceanic species not normally seen in coastal waters.

“Recent turbulent weather may have forced them inshore but it’s a complex situation.

“The jellyfish feed on plankton, which are more abundant at the moment and the seas around Scotland have warmed by a fraction of a degree in recent times.

“Even this small change means it can support species it never used to.

“It may mean we have to get used to seeing things like huge blooms of mauve stingers year after year.

“Jellyfish numbers are increasing all over the world, and over-fishing may mean there are fewer predators to keep numbers down.

“Blooms are very hard to predict – they can come and go with the tide.

“We’re urging people to report sightings so relevant local interests, such as fish farms, can be warned about their arrival.”