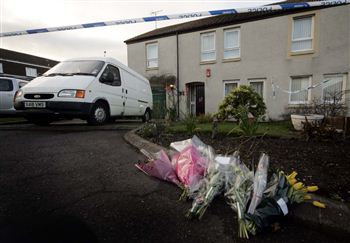 A 61 year-old-man was being quizzed by police last night in connection with the death of a 57-year-old woman.

Detectives said he had been held over the grisly discovery of a body in Stoneybank Drive, Musselburgh.

The scene of the death had been sealed off by police tape with an officer posted on guard outside number 24.

Police and ambulance services were called to the house at around 9am on Friday.Officers carried out extensive door to door enquiries into the circumstances which continued over the weekend.

The semi-detached house remained cordoned off with police officers at the front and rear.

All blinds and curtains were closed.

A white Ford van and silver Vauxhall Astra estate were parked on the driveway, behind the cordon.

Eight bunches of flowers have been left outside the house by friends and family.

One handwritten card, from her family, read: ‘To our wonderful, loving, happy mum – Joanne, John, Sophie and Georgia.”

A neighbour who did not want to be named said: “The police have been round twice but they are keeping it close to their chest.

“We don’t know what happened.”

Family members living nearby declined to comment on the situation.

A police spokesman said: “Enquiries are ongoing and it would be inappropriate to comment further at this time.”