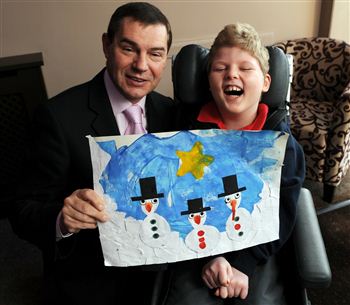 A BLIND youngster whose life was turned around with help from a specialist school in Scotland is to have his special handmade Christmas cards send to famous folk including Barack Obama and Nelson Mandela.

Nine-year-old Ben Wilson lost his sight and was left brain-damaged after a 16-hour fit when he was just six-months old.

But his proud mum and dad say his life has been turned around after just three months at Edinburgh’s famous Royal Blind School.

Ben won a Christmas card competition to have his design presented to famous political figures, including former US president Bill Clinton.

Staff at the school helped Ben to draw a picture of three snowmen wearing top hats – which will soon also be sitting in the White House.His proud mum Jenny, 39, said she was astonished at Ben’s progress since he started at the world-renowned school.

She said: “We tried for a good while to get him into the school and I have to say the amazing reputation it has is dead right.

“Even though he has only been there for a few months, the difference is there to be seen.”

When Ben was just six months old Jenny found him suffering a fit while in his cot.

Doctors say that her waking him up may have saved him from cot death, but the tot was left with severe learning difficulties.

Jenny said: “Call it mother’s instinct if you will, I knew something was wrong.

“In hospital we were basically told his brain was like a scrambled egg, and anything he was able to do was a bonus.

“But since he’s been in Edinburgh he has learned so much – he can help me with washing dishes.

“He is in a wheelchair but one day we hope he can get a powered once which would give him some more independence.”

“We knew he had to go there, he was getting very frustrated with life and this has helped.

“But it can be hard, when we speak to him or the school and hear what he was been doing we sometimes think we would have liked to have done that with him, or seen him do it.

“But he is calmer and happier, every night there is something to do at the school which is something I couldn’t do as a mother of two other children.”

He said: “The school is among the best of its kind in the world.

“Whenever I go there I am asked deeper, more challenging questions by the pupils than I get from those at George Watson’s or Heriot’s.

“The work they do is terrific, and the result of Ben’s design going to 6,000 people around the world who are on my Christmas card list, including Gordon Brown and Barack Obama, is testament to what can be achieved.”