A WOULD-BE Royal Marine has escaped a jail term after being caught selling over £18,000 of stolen camping gear on eBay. 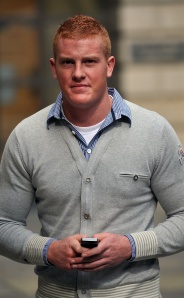 Andrew Pringle, 22, had his entry to the Forces suspended when it emerged he had been helping colleagues from his job at outdoor store Tiso to pocket massive profits from nicked goods.

But today (Wednesday) he borrowed the huge sum from his parents to repay the shop and was ordered to do 300 hours of unpaid community service at Edinburgh Sheriff Court.

He dodged jail after his lawyer claimed it was “sufficient punishment” that he will be repaying his mum and dad for the next ten years.

Pringle admitted selling stolen goods, but claimed throughout his court case that his colleagues had duped him into it and only given him £1,800 in return.

Sheriff Derrick McIntyre told Pringle: “I am very surprised given your upbringing that you didn’t distance yourself from such an enterprise.

“But you seem to have been sucked into it.”

Pringle’s promising future with the Marines looked to be in tatters when police found him selling thousands of pounds worth of kit online.

He had to postpone his application for two years while detectives investigated and faced a seven year ban from reapplying to the Armed Forces if he was jailed.

Tiso’s Commercial Street store in Edinburgh lost on out on £18, 269 of potential income as a result.

On joining the company in 2006, workmates lied to Pringle that they had a 60 per-cent discount on anything they wanted from the shop.

In fact, they were only allowed 40 per-cent off and faced the sack if caught selling on stock.

Pringle suggested selling the gear on eBay, but quickly his colleagues took advantage and started giving him stolen items.

Police contacted eBay and PayPal, and Pringle was charged with theft.

Nobody else from Tiso is under investigation, prosecutors said yesterday.

Fiscal Depute Aidan Higgins said: “There have been no investigations by police on anyone else.

“And Graham Tiso Limited have never been made aware of who the other people involved were.”

Idea snowballed out of control

Defending Pringle, Gillian Law said that what was at first a perfectly legal idea “snowballed” out of control, to the point where he didn’t know how much money was being generated.

She said: “There was no initial intention to be dishonest and what started out as a legitimate enterprise to help colleagues snowballed into something much more significant.

“He was paid a very small amount by his colleagues, to whom the vast amount of money was passed on.”

And when police told him how much cash was involved, he was “horrified.”

Miss Law said: “He is so deeply ashamed about his involvement in this and accepts full responsibility.

“This is a matter which for two year has been hanging over his head. The emotional toll on him has been significant, coupled with the shame he has brought on his family.

“He works as a doorman and has raised £5,000 in two years. He will be repaying his parents for ten years to come.

“That is, in my submission, sufficient punishment and further punishment would be onerous.”

Sheriff Derrick McIntyre said: “Your involvement was to facilitate the sale of stolen goods.

I am very surprised given your upbringing that you didn’t distance yourself from such an enterprise.

“But you seem to have been sucked into it.

“This was a breach of trust. In your case there are just sufficient positive factors that I am able to impose a non-custodial sentence.”