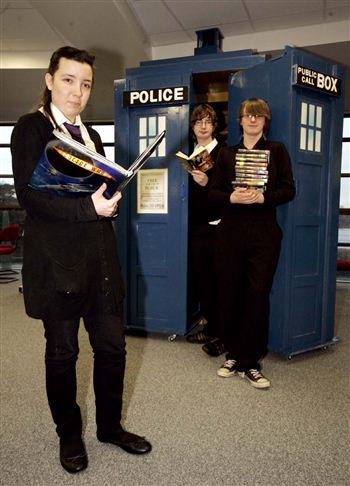 PUPILS at a Scots high school have gone Doctor Who mad after the show’s star actor David Tennant was voted the 5th greatest Scot of all time.

Youngsters at Holy Rood High in Edinburgh have just finished a three-and-a-half year project to make their own Tardis – made to the exact specifications of the show’s model.

The fanatic pupils even wrote off to the designers of the time-travelling machine to ensure it was just right, before embarking on the marathon project.

And they impressed former Doctor Sylvester McCoy, who sent the kids a letter praising their wacky idea.

Sarah-Anne Dalglish, Ryan Stark and several pals spent every lunchtime on the project and even got the tools out after school to put the 8ft machine – complete with theme music and flashing blue light – together.Ryan, who wants to become an RAF engineer, said: “We are big fans of the show and we thought we should build our own Tardis.

“We used an electrical doorbell that you can out sounds on.

“It took a of work, but at least its finished now.”

The kids have filled the Tardis with Doctor Who books and DVDs, and placed it in the brand new high school’s library.

Ryan, 17, added: “Our librarian is a big fan of Doctor Who and she was really keen on it.

Sarah-Anne, 16, said: “It took us three-and-a half-years to build and there were quite a lot of bits to do for the project.

“We worked in it after school a lot and on lunchtime nearly every day.

“But we all worked as one group and it made it easier.”

Marilyn MacLaren, education convenor at Edinburgh City Council said: “This is a project which the youngsters thought of themselves and constructed during their lunchtimes and after school.

“And the idea is to persuade and encourage young people to come in the library and read books.

“The fact that David Tennant was voted the 5th greatest Scot of all time this week indicates what an attraction Dr Who has for young people.”

Wacky Doctor Who star Sylvester McCoy, said: “’I was so hoping to make it to Edinburgh for the unveiling of the brand new Tardis.

“I am sad not to be able to make it and if only I still had my very own Tardis I could make it so, but some other recent regeneration seems to have the key!

“I wish everyone up in Edinburgh the best of luck with it and a fun day with the unveiling – what next, perhaps your very own K-9?”