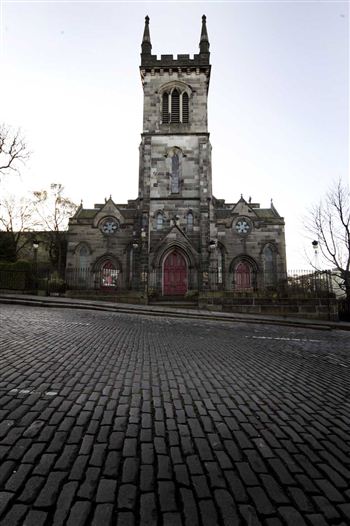 PLANS for Edinburgh’s trams are being challenged by a higher power after fears a congregation could be permanently cut off from their church.

The Presbytery of Edinburgh has backed Greenside Parish Church in their battle against street proposals for the controversial trams.

Edinburgh City Council intend to permanently close the right turn to Royal Terrace – where the church sits – for vehicles on London Road travelling away from the city centre.

But minister Reverend Andrew Anderson said the congregation would be “damaged” if the church became “virtually inaccessible” from the north and west of the city.

He said: “It is very damaging to the congregation if people have a perception of us as being inaccessible.

“As well as Sunday services, it would also severely hinder parents wanting to drop children off at organisations such as the brownies, cubs and scouts, who meet each week in the church halls.

“It creates quite an imposition and makes inaccessible which is a great concern – if people think they can’t get to us they just won’t go.

“We fear that gradually, people wouldn’t come along anymore and support will fall.”

Motorists attempting to access Royal Terrace have been diverted via Royal Terrace Mews, off of the Abbeyhill junction, which Mr Anderson described as the “most dangerous in Edinburgh”.

He added: “We have really felt a difference among the congregation and it’s been very well discussed – we are working with local businesses as well so we definitely are all together on this objection.

“We have held meetings and know how the residents and business owners feel. – the whole community is in.”

As well as residents forming a steering group to spearhead the campaign, local businesses – such as The Royal Terrace Hotel also located on Royal Terrace – are also rallying together to stop the permanent closure.

Alisdair Mackay, operations manager at the hotel, said staff had dealt with complaints from guests who suffered at the hands of the diversions.

He said: “The closure has caused a lot of inconvenience as our guests have had to go the long way round to get to us – we do get a few frustrated people.

“Cars have trouble getting up and down the street and obviously people even using their sat navs will have problems as it won’t be updated.

“If the road was closed for good it would cause us a lot of problems – it’s frustrating because the trams are quite a bit down from where we are.”

The Moderator of Edinburgh Presbytery, Reverend Peter Graham, personally endorsed the campaign and asked members to appeal to the city’s council.

A spokesman for Edinburgh City Council said that the road would not be closed but motorists would be restricted on their entry and exit to the street.

He said: “These traffic management proposals will be advertised in February, at which point formal objections may be lodged.”