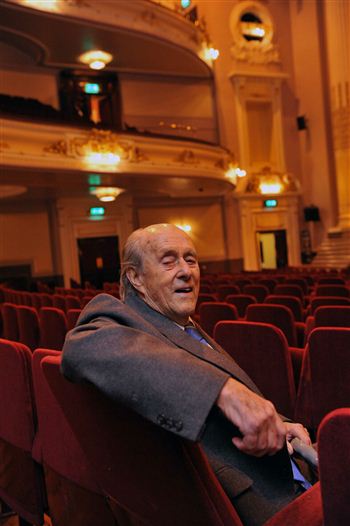 JOHN Lawrie Lumsden and the world-famous Usher Hall go back a long way.

He won the 1920s version of the X-Factor there as a nervous schoolboy 80 years ago.

And the huge concert hall has wowed audiences for nearly a century.

Now the landmark venue, situated at the foot of Edinburgh Castle, has asked him back so they can share their 95th birthdays.

But while he didn’t go on a Susan Boyle-style fairytale, he was a guest at the Queen’s coronation after four years of jungle hell, fighting the Japanese behind enemy lines as part of an elite special forces unit.And elsewhere in a colourful life he served as chief architect on building projects across the globe with the Colonial Office, now the Diplomatic Service.

On returning to the famous hall on Thursday, Lawrie, as he is known, recalled the days when a Saturday at the theatre was the primetime TV of its day.

He said: “It is now 80 years come and gone, since I last sang from the stage of the Usher Hall as a 14-year-old boy.

“I was one of a dozen entrants to sing set pieces including ‘Flow Gently Sweet Afton’ and ‘Where’er You Walk’.

“I was singing in a competition in a festival, a festival for chores, orchestras, soloists, rather like the Gaelic Mod nowadays.

“We used to have it once a year and all the schools sent in competitors, I won the boys soloists.

“The theatre was full I think, I remember being on stage, but it must have changed quite a bit since then.

“I couldn’t tell you if my family were there as well, it’s that long ago. I suppose they probably were.”

Lawrie then went onto study architecture at the Edinburgh College of Art, completing all but one year when war broke out in 1939.

He said: “I was going into my final year at the College of Art, training to be an architect, when the war began.

“I could have asked to stay and finish my course, but I chose to go with my friends.”

Lawrie, who joined the Royal Engineers was hand-picked to join the Chindits – the SAS of their day – based deep behind enemy lines.

The small force was the best of the best, taken from the British Army and the Gurka units of the British Indian Army.

They each carried 72 pounds of equipment – more than they would load their mules with – to survive the horrors of the dense jungle.

At the height of the war in the east, Lawrie would arrange for vital supplies to be dropped to the troops, carefully building a signal for the planes, without giving their position away to enemy troops. 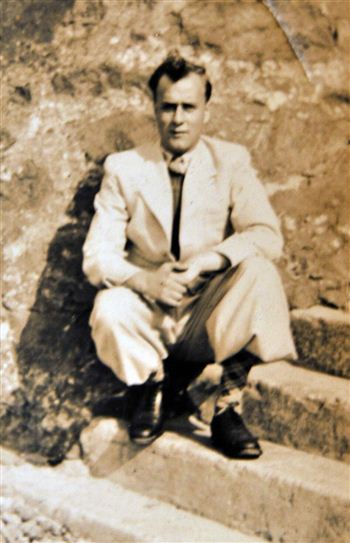 He said: “I was in the army for 6 years, mostly in Burma and India, and I was in the Burmese jungle for three or four years of that.

“I worked with the Chindits and part of my job was to organise the signals for the planes to drop food to us, as well as being chief engineer.

“The Chindits survived on those airdrops.

“They were very tough conditions and a lot of the men got tropical diseases, I did later and was in hospital for a year.”

“I remember the Japanese chased me through the jungle, they were different back then, very nasty.

“I knew what would happen to me if I was caught, we all did, luckily I never was.

“I later found out that a golfing partner and good friend of mine piloted the planes that supplied the Chindits in that area.

“We didn’t know each other then, and he just mentioned it one day, quite unbelievable, but there you go.”

Lawrie then spent a whole year of his life in hospital near Loch Lomond suffering from dysentery, before leaving the army at the end of the war.

He said: “I remember being demobbed at Edinburgh Castle and they were very good at looking after us and finding us work.

“I tried to find work in my field but it was very hard for those in my industry after the war – you couldn’t get a bag of nails without a request form.

“So I joined the Colonial Service and went abroad, and I worked for the service until 1963.”

Lawrie finished his course at the Edinburgh College of Art, before serving as chief architect on many projects across the Commonwealth.

He returned to the UK on leave from the service and received a special invitation from the Lord Chamberlain to go to Buckingham Palace just five days after the coronation of the Queen.

He said: “It was just after the coronation, her first garden party, in the garden of Buckingham Palace.

“We had been outside at the coronation as well, right where all the carriages stopped.

“I remember it was wet, a day like this.

“I was on leave from the Colonial Service and I had been in Mauritius, that was my posting in the service, chief architect in Mauritius.

“I’d done five years out there and went home on leave, I guess that’s how we got invited.

“I just found that invitation in my papers today, I must have kept it all these years.”

He left the Colonial Service in 1963 and returned to Scotland with his wife, setting up his own architecture business in his hometown of North Berwick.

He retired in 1979 and spent much his time on the fairway, improving his handicap right up until the age of 93, and playing golf with the same friend that dropped supplies to his small unit all those years ago in 1944.

Lawrie said that being back in the Usher Hall brought back memories of his early years, and from that one night when he stood in front an audience of thousands 80 years ago.

He said: “It’s a wonderful hall, it really is, it’s funny to think that I’m the same age as this building, 95-years-old.

“I was just looking at the gold leaf guilding around and about, which is absolutely lovely, it’s certainly a beautiful hall, it really is.”