A LETTER sent to the parents of tragic Jessica McCagh by fire-ball killer Stewart Blackburn after her murder shows his obsession with death, a handwriting expert has revealed.

Sick Blackburn, 18, penned a poison note from his cell at HMP Perth before being convicted of dousing pretty Jessica in petrol and setting her on fire.

Now top handwriting expert Barbara Weaver has revealed that his child-like writing shows it was just a matter of time before the youth lashed out.

Barabara, from from the Cambridge School of Graphology, said his letter proved he was prone to lash out and likely to have fantasies about the death and a desire to punish.

She also said Stewart’s writing indicated that he had issues with his mother and reveals a cold, calculating individual who doesn’t think about the feelings of others.

Barbara said: “Distortions in his writing indicate that he does not deal well with personal situations and he lacks sensitivity to other people’s feelings.

“It could well indicate a harsh, crude and brutal individual.

“He expects others to do all the adjusting to him, he refuses to admit that he could be wrong and will fight back rather than compromise.

“He is especially rebellious when he feels insecure, and tries to win through intimidation.

“He has a temper and so this will fuel his defiance even further, so that he is likely to lash out easily.

“The crude epitaph on the final page is also significant in that it shows no sensitivity towards the feelings of others.”

She goes on to say that the letter shows that Stewart is obsessed with death.

She said: “He may have fantasies about death, either related to someone else or regarding himself.

“He does mention wanting to die in his letter.” 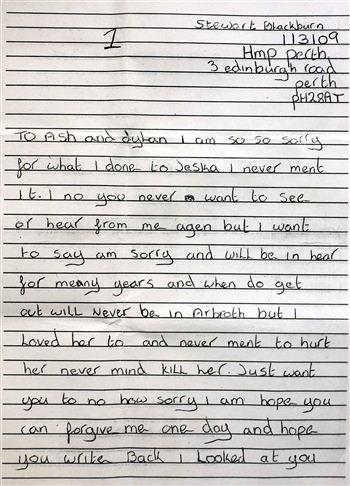 The High Court in Livingston learned Stewart had been fostered as a child.

And Barbara added: “When there is an extreme leftward trend it usually means there has been an incomplete mother bonding stage.

“The writer is likely to have unresolved issues with his mother or mother substitute.

“There are sufficient examples to suggest that this is a strong feature of his character.”

That ties in with evidence given during the High Court trial which heard he had spent time in foster care as a child but still harboured hopes of being reunited somehow with his natural mum.

His note, addressed to Jessica’s sister Ashley, is littered with spelling mistakes and does not even spell Jessica’s name correctly.

In it, Blackburn begged forgiveness and promised never to set foot in Arbroath after his release.

Tellingly, his letter suggests he may now also suffer to adapt to spending the next few years in prison.

She adds: “There are indicators of defiance in his writing. Misplaced capitals reveal contempt for authority and a refusal to be ordered about. He tends to be troublesome without cause.”

Most revealingly, she says that Stewart’s handwriting tells of mood swings, emotional instability and unpredictability, and a self-imposed isolation in order to keep his feelings switched off.

She said: “Stewart’s writing has wide word spacing which indicates social isolation from others, either self imposed or imposed on him by the rejection of others.

“By keeping his distance from others, the writer is able to keep control over his emotions.

“He is lonely and fears being alone.

“He doesn’t want to lose the thing he loves, so tenaciously hangs on to what he has.”

And it isn’t just the letters themselves that are child-like – Barbara said that the composition of the note shows that Stewart’s emotional growth stopped when he was a young boy.

She said: “Many psychoanalysts believe that an individual’s emotional growth goes through a number of stages. The first stage is referred to as the oral stage.

“During this period, the child is totally self-centred.

“The whole world revolves around him and his whole focus is on the satisfaction and gratification of his immediate needs.

“If he stays rooted in the oral stage, all his future behaviour will subconsciously reflect what he learned during that stage, for instance tantrums, crying and outrageous behaviour in order to gain attention.

“The writer shows signs of the need for attention.

“If the child has not received sufficient love and attention during his formative years, he will suffer psychological damage.

“He will continue into adulthood trying to find the fulfilment he never had.

“The incomplete oral phaser will enact very childish behaviour as an adult. He will behave in childish ways in order to get his needs met.”

The hand-scrawled letter, addressed to Jessica’s sister Ashley, is littered with spelling mistakes and does not even spell Jessica’s name correctly.

In it, Blackburn begs forgiveness and promises never to set foot in Arbroath after his release but insists the tragic teenager’s death was an accident. 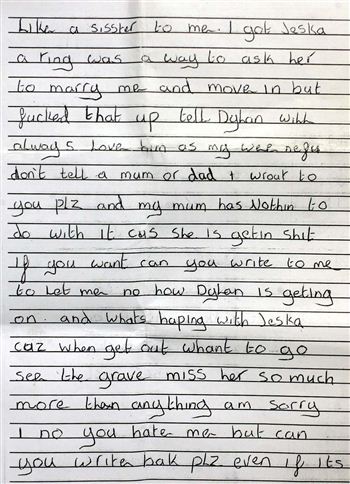 He also acknowledges that he is to spend many years in prison but offers a chilling insight to his psyche when he claims he will torch himself in front of her family on his release.

He said: “If you want when I get out I will stand in front of you all and set myself on fire. Just so I a bit happier noin that am dead to and can be with Jeska.

Blackburn claims in the note that he was set to ask Jessica to marry him and said he wants to visit her grave.

“If you want can you write to me to let me no how Dylan is getting on and whats haing with Jeska cuz when get out whant to go see the grave miss her so much more than anything am sorry.

“I no you hate me but can you write bak plz even if its just the onec.”

Blackburn ends the note with an apology and a line claiming he loves all of Jessica’s family.

It reads: “Am Sorry from Stewart.

“Love you all by.

“Am sorry with all my hart.”