Subo to play for Obama family at the White House 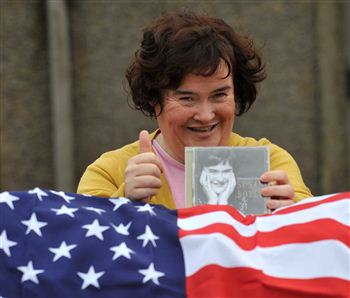 SUSAN Boyle has been invited to perform for Obama and his wife in an “intimate gathering” to celebrate Michelle’s 46th birthday.

The star is said to have impressed the President and his wife – adding more famous faces to the SuBo fan club.

And they want her to sign her signature tune ‘I Dreamed a Dream’ at the White House to celebrate the First Lady’s special day on January 17.

But media commentators warn that the performance could be make or break for the singer, who is yet to do a big live show since the end of the Britain’s Got Talent tour.

A senior White House aide said: “It will actually be a double celebration because three days later, January 20, marks the first anniversary of the president taking office.“I would expect that a formal invitation will be made to Miss Boyle in the very near future. The President and First lady absolutely love her voice and will be delighted if she agrees.”

And Los Angeles media analyst Mike Raia agrees that the invite signals a coup for the 48-year-old performer from Bathgate who has stormed up the British and American album charts.

He said: “Susan’s success in America has been phenomenal.

“She’s out-performed Rhianna and Lady GaGa in the charts and registered an all-time record on Amazon for advance orders but now the big test is about to come; can she back it in front of huge audiences or smaller gatherings of VIPs?

“This is a cruel business and, if she can’t, her popularity could wane as quickly as it has grown.”

Referring to the time Susan spent in the Priory after she lost the final of Britain’s Got Talent to dance troupe Diversity, he added: “If she accepts the White House gig, it will either be the greatest moment of her life or, if she fluffs it for even a second or two, the worst nightmare imaginable.”

SuBo has been a huge hit in the States since her performance of I Dreamed a Dream was watched by millions on YouTube.