A BAR worker helped two masked robbers fake a hold-up at the pub where he worked after he was offered a cut of the takings. 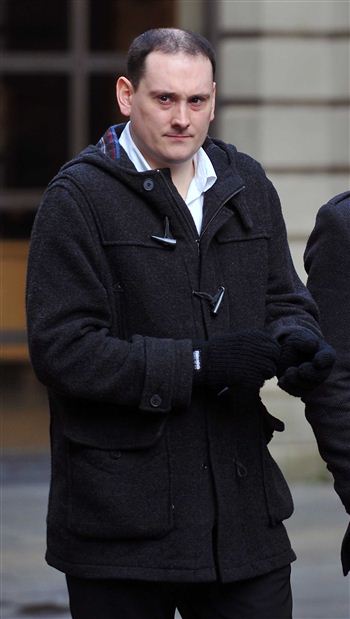 Hume let the pair push him behind the bar before they made off with over £3,000 worth of takings and fled the scene.

He said they had offered him a one-third cut of the scheme, which was captured on the pub’s security system.

But when cops quizzed Hume about the raid he admitted that he had helped to stage the theft and had got nothing.

Hume was arrested and today (Tuesday) at Edinburgh Sheriff Court he admitted theft by staging a robbery at the Capital’s Kirk Loan bar on May 16 this year.

Fiscal depute Ruth Ross-Davie told the court how Hume had been working at the bar at around closing time on the day of the theft.

She said: “Mr Hume worked at Winston’s Public House and was working there at around midnight with another person.

“He told his colleague that she could leave early and Mr Hume was to deal with clearing up the bar on his own.

“The two masked men ran from the pub.”

“He knew about it”

Miss Ross-Davie said that during the investigation of the robbery Hume was questioned on June 1 this year and he confessed he had helped stage it.

She said: “He indicated that he knew about it and had been involved in arranging the robbery.

“He was due to get a third of the proceeds of the robbery but he had received nothing.”

Miss Ross-Davis said Hume, a first offender, had co-operated with police but added that none of the money had ever been recovered.

Sheriff John Horsburgh deferred sentence for background reports and Hume, of Roseburn Avenue, Edinburgh, will return to court next year.