BRITAIN’S only Polar Bear has stunned her zookeepers by hiding from a fresh flurry of snow. 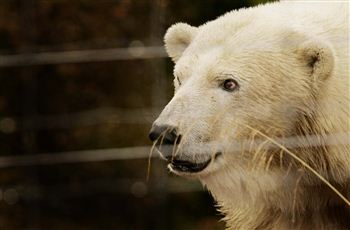 Edinburgh Zoo’s former favourite attraction – Mercedes the polar bear – was shifted north to the Highland Wildlife Park to roam in a colder habitat to match her native Canada.

She was expected to lap up the white stuff like every other Polar Bear on earth.

But when Scotland’s first snow came to Kingussie, the freezing conditions proved too much for Mercedes, and she hid in her den.

One zookeeper said: “We all waited with baited breath to see how Mercedes would react to the first snow fall in her new home.

“This week we saw the first snow fall in Scotland, and as would be expected, the Highland Wildlife Park had its fair share.

“However, her reaction was not as exciting as we may have hoped.

“Rather than playing in the fresh snow as we would expect the penguins to do, Mercedes decided to find the warmest and least snowy spot in her enclosure, and to sit out the cold snap right there.”

She has been settling into the massive new enclosure for two months since her move.

The £75,000 transfer was conducted with military precision as she was carefully transported in a giant rhino crate on the back of a truck.

Soldiers even had to build a temporary road for her arrival at the park, which gets 65,000 visitors per year.

Her move north brought her nearer to where the remains of one of Britain’s last known resident Polar Bears was found.

It was thought the bear was washed into caves at Inchnadamph in Sutherland 18,000 years ago.

The Wildlife Park stated on its website that Mercedes behaviour will be monitored throughout the winter and urged visitors to send in photos and videos of her in the snow.

Mercedes was rescued from her native Canada after she was scheduled to be shot.

She had been wandering into a nearby town and it was decided there was no choice but to shoot her to protect the public.

But members of the Royal Zoological Society of Scotland arranged for her to be shipped over to Edinburgh, where she arrived in 1984.

She was paired up with male polar bear Barney when she arrived in the capital and they went on to have two cubs, To-Nuik and Ohoto, who were both moved onto other zoos.

When Barney passed away 13 years ago, Mercedes was left on her own.
She is the only polar bear in captivity in the UK.

Scientists estimate that there are between 20,000 and 25,000 polar bears in the wild and a further 200 in captivity around the world.

In the wild, Mercedes would be living in the snow and ice of the North Pole, Alaska, Greenland, Scandinavia, Russia, or her homeland of arctic Canada.

The animals are usually at home in the wintry landscape – even using sea ice to move to different hunting grounds – making Mercedes’ reaction even more unexpected.