Supporters give blood for Sammi 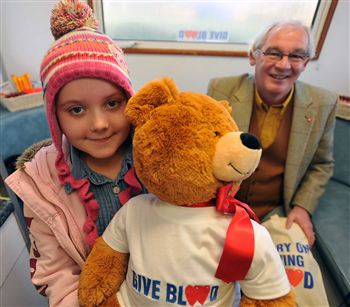 MORE than 100 well-wishers were joined by Jim Leishman as they rolled up their sleeves yesterday (Thursday) and gave blood as part of a campaign spearheaded by a nine-year-old girl suffering from cancer.

Samantha (Sammi) Bradley – who was diagnosed with leukaemia in August – has attracted enormous support after attempting to raise awareness of the disease and the need for blood donors.

Sammi’s mum, Susie, was overwhelmed when 105 of her colleagues at Dunfermline Building Society – where she has worked for seven years – signed up for the session within a mobile donation clinic.

She said: “I was amazed by all the friends and colleagues who have shown their support it really is fantastic.

“Sammi is loving all the stuff that’s been going on as she has been in the paper a couple of times and just thinks it’s great.

“We have held lots of fundraisers including a bake sale and raffle and Sammi’s school held a fundraiser where everyone dressed in pyjamas – everyone has been so generous.

“It means a lot to us as a family as everyone came together – our aim is to raise awareness of leukemia and giving blood and the Sick Kids. The hospital has helped us so much and will continue to help us.

“Sammi is definitely more aware of how important it is to give blood as after more than 100 people give blood today that will help 300 people.”

Sammi – who lives in Pretoria Place, Cowdenbeath – started a new block of chemotherapy at the beginning of the month at Edinburgh’s Sick Kids Hospital and has undergone 18 weeks of treatment out of a two-year-long process.

Employees from Dunfermline Building Society also presented a cheque for £2600, to be split between Leukaemia Research and Edinburgh Sick Kids Hospital, to the charities, which had been raised through a raffle, bake-a-thon, name the bear competition and a sponsored 10k run.

Susie, 36, added: “Sammi is our shining star – she is so funny and beautiful, she makes us laugh all the time dancing, singing and doing magic tricks.

“We know that December will be tough but she knows that she needs to go through this to make her better.

“She is so brave and does everything she is asked.”

And Jim Leishman, director of football for Dunfermline Athletic FC, attended on the day to speak to Sammi personally.

He said: “I think it is such an ordeal for a wee girl to go through and I think she is so brave.

“My first involvement with the charity was when I was a 16-year-old footballer with Dunfermline – one of the senior players, John Lunn, had leukemia.

“When I was asked to help with this campaign, I thought that would be great.

“When I first got married I stayed just down the road from where Sammi’s mum and dad stayed so I have known of them for a long time.

“The people of Dunfermline have been brilliant – just magnificent – and anything that the club or I can do to help, we will do it.

“This is not just a one off – she is a special wee girl and today has been daunting but she has been fantastic.

“I’m just a local lad and when local people need a helping hand I hope I can help – if me being here helps then that’s great.”

Sammi’s dad, Mark, gave the session an extra boost by rolling up his own sleeve and donating blood for the worthy cause.

Mara Fraser, deputy team manager for the Scottish National Blood Transfusion Service, was on site to oversee the day’s events.

She said: “I think it it’s great that people are taking an interest in this little girl and that we are benefiting from it – that wee girl really needs us at this time and there are many more just like her.

“I met Sammi this morning but I know she is a very brave girl to do this – she was quiet but I think it’s quite overwhelming for her.”