A TEENAGER is battling for his life after a mystery accident at a busy train station. 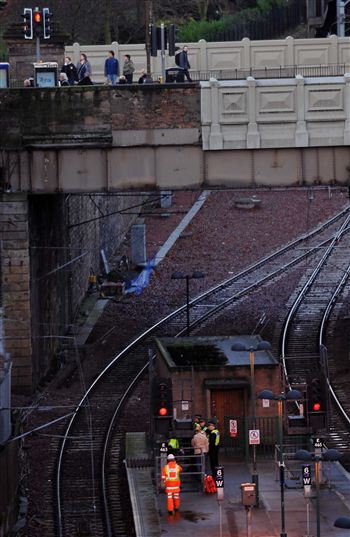 The 19-year-old man, who has not been named, was found by Network Rail staff at Waverley Station in Edinburgh at around 5.30am on Thursday, December 10.

It is feared he may have fallen from Waverley Bride, or been struck by a train – or both, and police are appealing for witnesses.

Paramedics raced him to Edinburgh Royal Infirmary to be treated for serious head and leg injuries and ambulance staff said he was in a critical condition.

Platform eight at the busy commuter hub was closed and trains had to be cancelled over rush hour before it was re-opened late the morning following police investigations.

British Transport Police said they were reviewing CCTV footage of the incident and said they could not confirm how the man received his injuries.

They appealed for any witnesses who may have seen him between Edinburgh’s Market Street and Princes Street between 1am and 2am.

A BTP spokesman said: “We are looking for anybody who was on Waverley Bridge between 1am and 2am yesterday morning and may have seen a 19-year-old man who was on the station entry side of the bridge.

“He has brown hair and is between 5’8’’ and 5’10’’, of slim build and was wearing blue denims, white trainers and a grey hooded-top with the hood down on his shoulders.”

The spokesman said police were unable to confirm reports by ambulance staff and Network Rail that the man had been hit by a train.

He added: “We are still trying to find out how he came about his injuries.”

A Network Rail spokesman said: “We understand that the incident was reported just after 5.30am.

“A train had struck a person on the line near to platform eight. That was closed immediately and the emergency services were contacted.

“We had to cancel a couple of trains this morning but disruption was kept to a minimum by diverting traffic to other platforms.

An ambulance control staff member said: “We were called to Waverley Station at 5.46am, it was someone who had been hit by a train.

“They had severe head trauma and were transported to Edinburgh Royal Infirmary and were in a critical condition.”

First Scot Rail declined to comment but said three services had been affected by the incident.

The 5.30am Aberdeen service terminated at Haymarket, the 6.14am Newcraighall service was cancelled and the 6.36 Newcraighall to Glasgow Central started at Waverley.