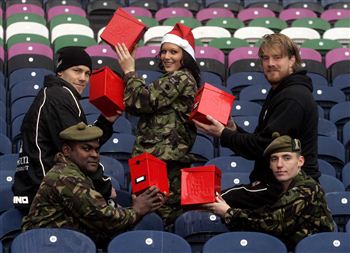 SCOTS troops fighting in Afghanistan are being sent some SCRUM-my treats to cheer up their Christmas in Helmand.

Gift-boxes dubbed ‘square stockings’ filled with all kinds of stuff needed to boost frontline morale for 600 soldiers from Edinburgh based 1-SCOTS and 3 RIFLES will shortly be winging their way to the frontline.

The MoD and charity uk4u Thanks! Use public donations and sponsorship to make sure the gifts are sent to all serving personnel and civilian workers based on operations abroad.

Yesterday the campaign received a boost from Scotland rugby stars, Simon Cross and Simon Webster urging the public to back the charity with donations rather than sending their own packages to ensure as many arrive as possible.

Flanker Cross said: “”I come from a military family so I know only too well how hard separation can be for troops and their families. They do a great job in difficult conditions and are very much in our thoughts.”“

Winger Webster added: “I’m honoured to support the brave men and women of the Armed Forces and I know my team mates join me in wishing them and their families a safe and very merry Christmas.””

Commanding Officer of The Royal Scots Borderers, 1st Battalion the Royal Regiment of Scotland (1 SCOTS) Charlie Herbert said: “”Support from the public is tremendous and much appreciated, but we urge people to donate to uk4u rather than sending their own parcels to troops.

“We already have more anonymous post than we can cope with, which can prevent parcels from friends and families getting there in time for Christmas.  This isn’t a normal postal situation –this is a war zone where everything has to be distributed by helicopter in a dangerous environment, so the pressure of all these extra parcels could affect operations or put people at risk.”

“We don’t want the support to stop, but the best way for people to back the troops is to donate to uk4u or simply hold off from sending parcels for a couple of months.””

1 SCOTS Commanding Officer Charlie Herbert said: “”It’s never easy being so far away from your loved ones over Christmas, you never get used to it, but morale is high amongst the company serving there, and the lads are in very good spirits.

“They’re looking forward to opening the surprise stockings on Christmas Day and perhaps singing a carol or two.  They will all take the opportunity when possible to phone home and speak to families and friends, but it will also be business as usual over the Christmas period, getting on with the job in Helmand, which helps to take your mind off the separation.

“Knowing that the public are behind us and support our efforts, especially over Christmas, is a real morale boost.””

Members of the public can support our troops, by donating money at www.uk4u.org or through other groups. Details can be found at www.mod.uk/PublicSupportForOurServicePersonnel.