SIR Sean Connery has stunned politicians by fronting a lucrative ad campaign for a bank which was bailed out by tax payers’ cash, despite slamming fat cat financiers during the credit crunch. 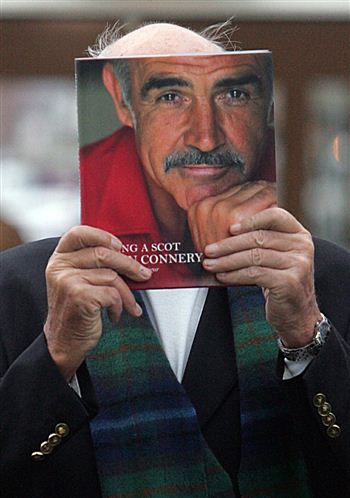 But French politicians have branded his endorsement of Credit Agricole – who received £2.7 billion in aid from the country’s national pot – “embarrassing”.

The three-year deal will reportedly net the Bond legend £1.2m and the bank insists Connery represents a “back to common sense” message.

But the deal seems at odds with the SNP supporter’s beliefs over the banking collapse and also conflicts with recent concerns expressed by the Scottish Government.

In his book, Connery wrote: “Little did we all know then that (this) bonnie bank would fail in 2008, as catastrophically as Scotland’s Darien misadventure had done over 300 years ago.

“Just as the banker William Paterson’s ambitions had caused the disaster of Darien, so had the reckless foreign acquisitions of the banker Fred Goodwin, chief executive of the Royal Bank of Scotland, wreaked disaster.

“Both had to retreat from their over-extended misadventures and both had to be rescued by the state with many billions of taxpayers’ pounds. Who are the conmen now?”

He said: “The public are quite clearly deeply concerned, and the directors should be focussing on their obligations to taxpayers rather than bonuses.”

The plug – for the bank’s international campaign – can be viewed on the company’s website but is not thought to be showing in France.

A spokesman for the French Socialist Party slammed the ad.

He said: “This sort of behaviour does not make sense when the French economy is yet to restabilise.

“Spending this amount of money on an advert is not normal and is embarrassing.

“Credit Agricole must remember their role is to finance France’s economy.

“The money they have spent comes from Credit Agricole’s customers who put their money into their accounts.

“They do not have the right to spend millions on publicity.”

A Credit Agricole spokesman said: “He represents something and someone which corresponds worldwide with a bank which is responsible.

“He is a man who fits in with our message which is ‘Back to common sense’.”