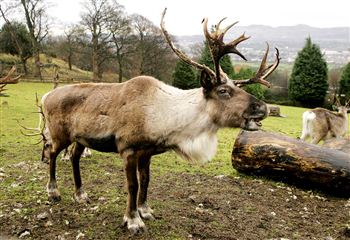 A RANDY reindeer faces a year without any nookie – after having one of his knackers lopped off in pioneering new operation.

Keepers at Edinburgh Zoo became worried when male Eskimo was bullied by others in his herd who wouldn’t let him join in any reindeer games.

They later discovered he was suffering a rare condition where one of his testicles was found stuck in his abdomen.

It was causing him to be submissive, stunted growth of his antlers and generally made him a laughing stock of the group.

Now the eight year-old virgin is en route to becoming the dominant male of the group after life-saving keyhole surgery – a world-first for a reindeer.

Experts used special tools to remove the rogue tissue before Eskimo amazed the team led by Romani Pizzi by making a speedy recovery which saw him up on his feet within 10 minutes.

The Laparoscopic keyhole is normally only ever carried out on humans by experts using specialist instruments.

Mr Pizzi recently presented the Vets on the Loose series on the BBC and Discovery’s Animal Planet.

He said: “Eskimo hardly seemed to notice he had even had surgery.

“The operation was much more difficult than working on a dog or a cat – although a reindeer is a reasonably large animal there is very limited operating space.

“We haven’t seen a difference in his behaviour yet – he has been a bit more supported but we wouldn’t expect it just yet because it takes a few months for his hormones to go back to normal.”

Staff at Scotland’s busiest zoo feared for Eskimo’s life when it was thought the retained testicle was developing into a tumour giving off abnormal hormones.

Now they are confident he will dominate the herd.

However his treatment means he has just missed the annual mating season which runs from October until December.

That means he will have to wait until next year before showing off his joy to the world.

Karen Stiven, senior keeper at the zoo, said the signs were good saying the reindeer were “all friends now” following the operation.

She said: “He was being bullied but now he has been welcomed back, they don’t keep away from him as much and the other male is not being as aggressive.

“He is now a fully functioning male so hopefully this time next year he will be on the road again.

“Their mating season is usually between October and December so we will see how he is then.

“There is always a dominant male but now there will be more competition for the females.”

The tools that helped save Eskimo’s life were developed by Leeds-based firm, Surgical Innovations.

Their managing director Graham Bowland said: “This was the first time it has been used on reindeer and although it was nerve wracking it is a great result for Eskimo.

“It was difficult surgery in that there was such little space and it was a real challenge for Romaine but it’s a wonderful story and I’m glad Eskimo will be fit and ready for a busy Christmas Eve.”